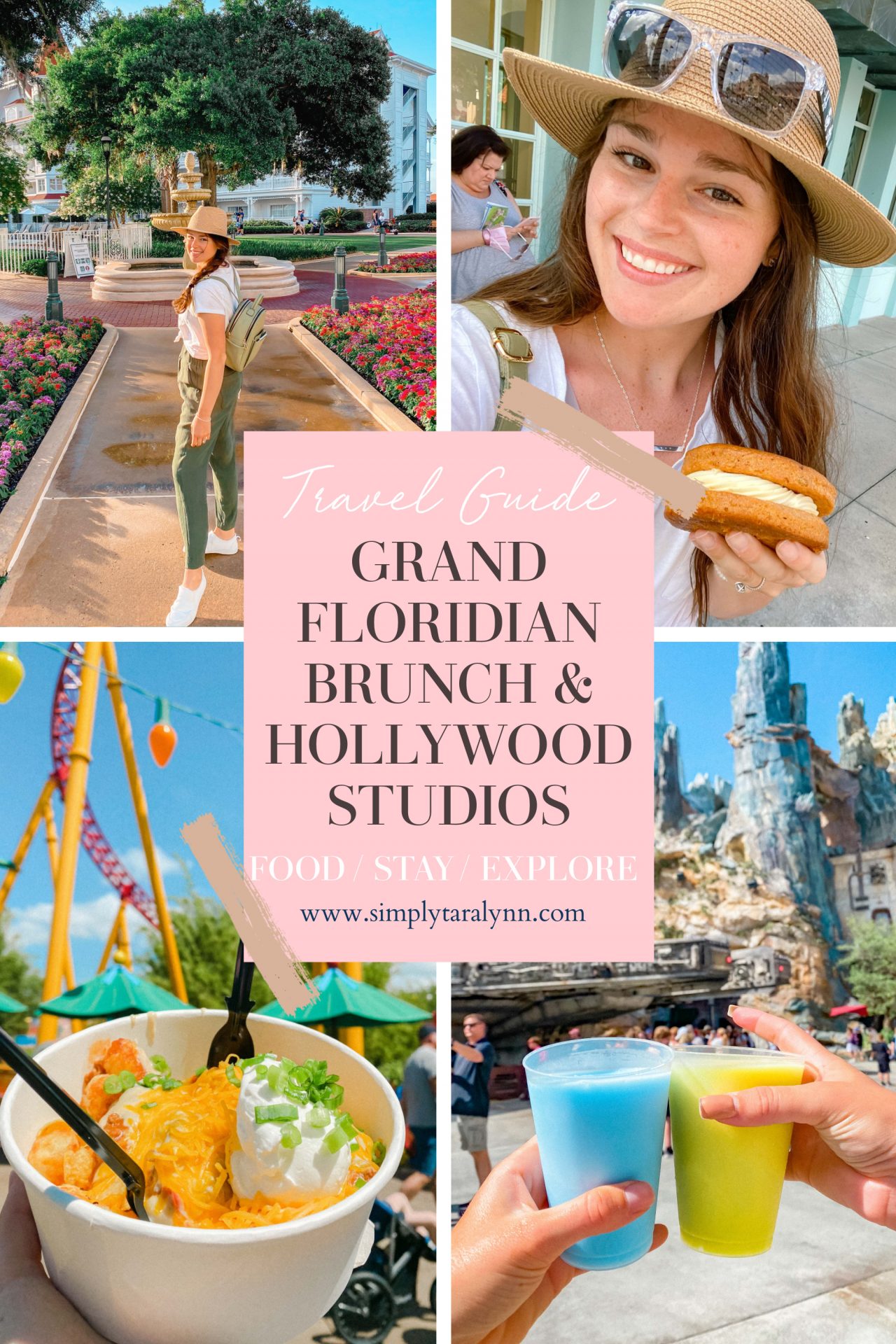 Happy Friday! I had the Disney cravings this morning. I couldn’t stop thinking about taking a trip to Disney World, and so I started looking at flights, hotels, and so on. But then I decided to hop on the blog and start finishing up my Disney blogs to cure my cravings. I still have so many to write! Today, I’m sharing the morning we had breakfast at the Grand Floridian and an afternoon at Hollywood Studios! 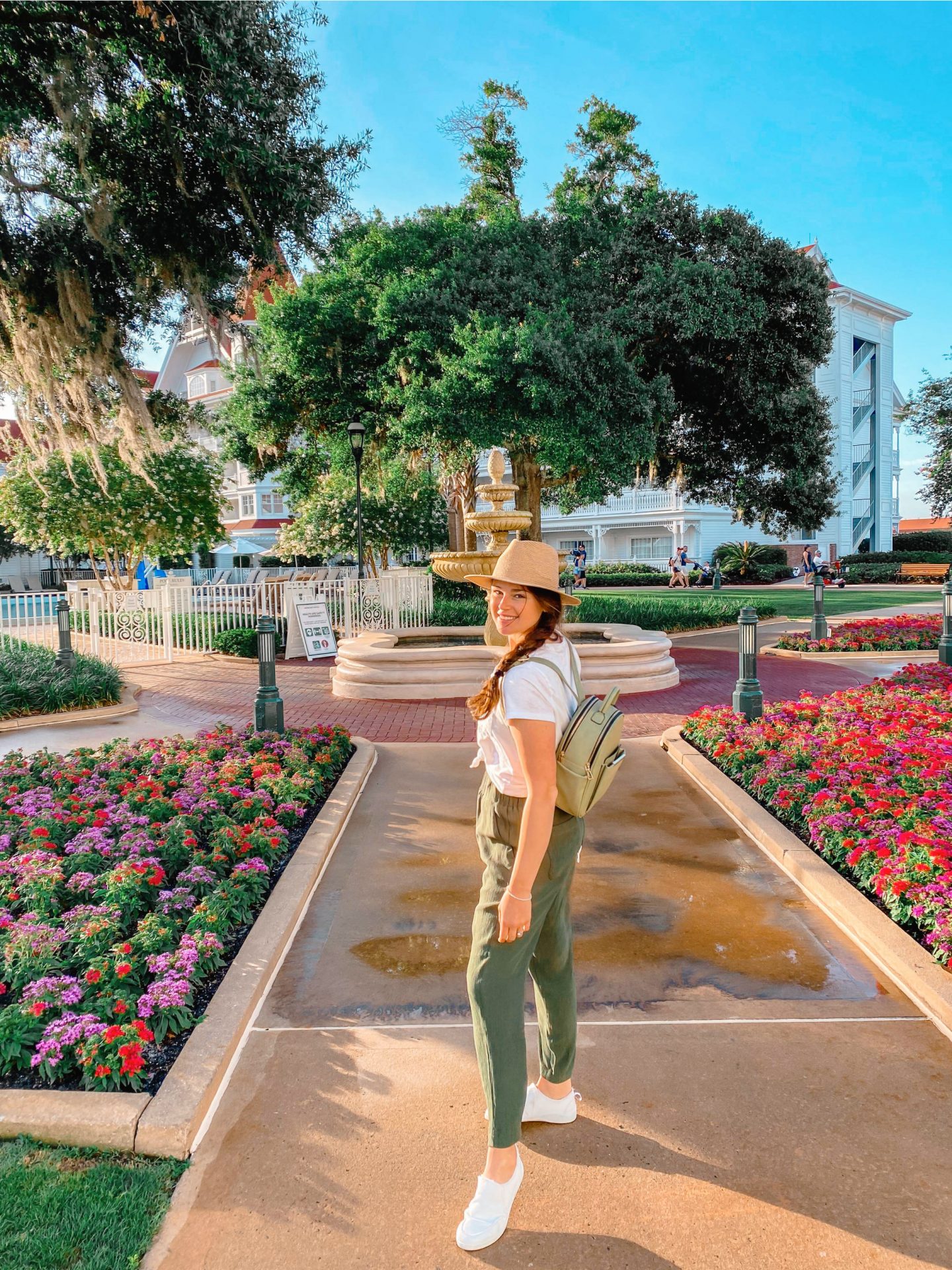 Having breakfast at The Grand Floridian should be a MUST on your Walt Disney World Itinerary.

The resort is absolutely breathtaking, and the food was unforgettable. 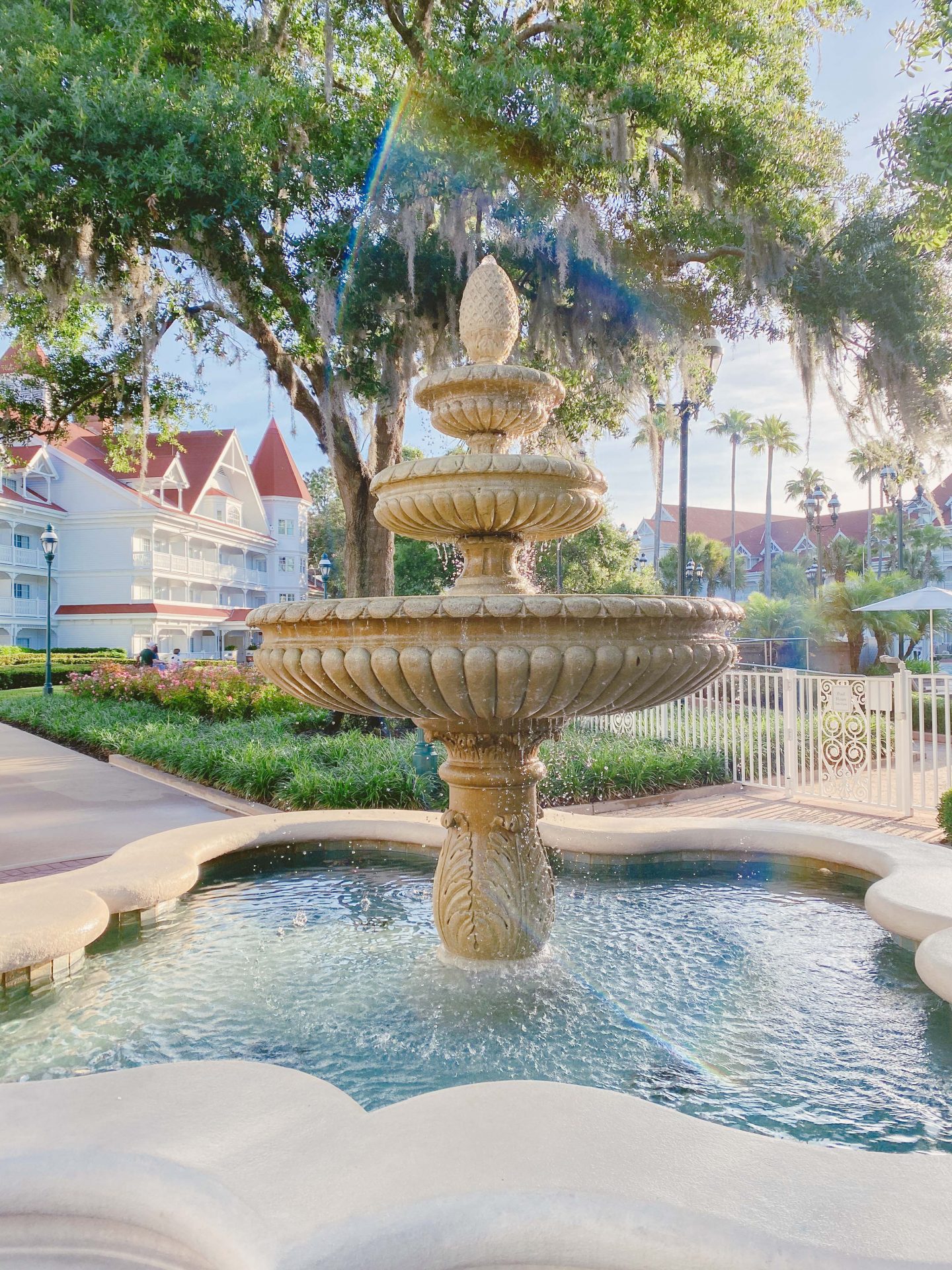 We took the monorail from our hotel and arrived at the Grand Floridian for breakfast at 8 am. We had a fun day planned for Hollywood Studios and The Animal Kingdom right after! I love how easy the transportation is at Walt Disney World. It makes everything stress-free while park hopping or resort hopping.

We used a Disney Park Hopper Plus pass for the week and made everything so convenient. It allows you to make a theme park reservation, and then you can park hop after 2 pm at any of the other Disney World parks. So if you can’t get a reservation for a park during your trip, no worries, you can go after 2 pm! We had a reservation for all the parks early in the mornings and then hopped over to other parks later in the day.

Getting around the Disney parks is a breeze with the busses, the monorail, and the Skyliner! The Skyliner lines go so fast! If you see a line with many people, your wait time may be up to fifteen minutes. They’re constantly getting people on and off the Skyliner. 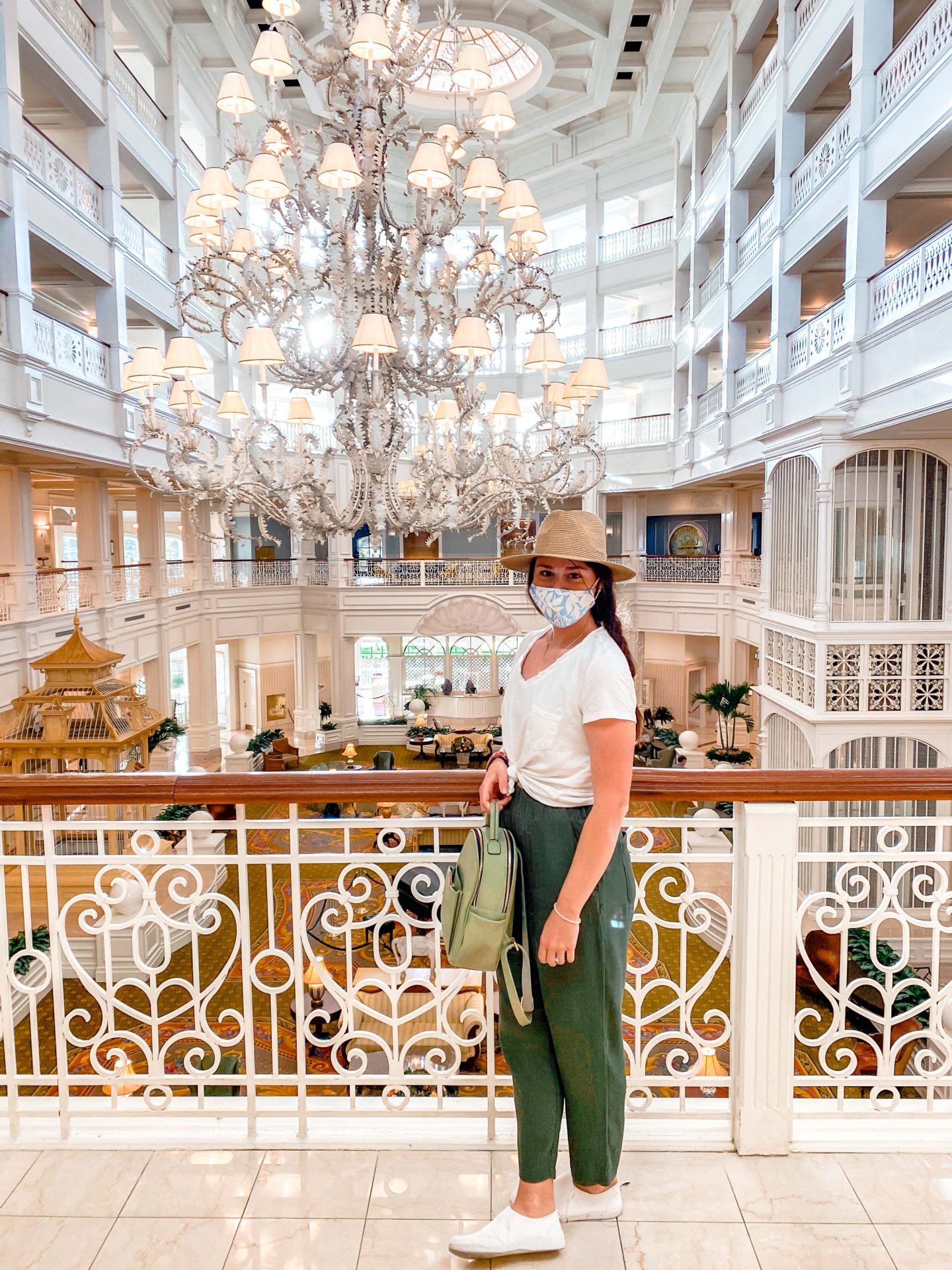 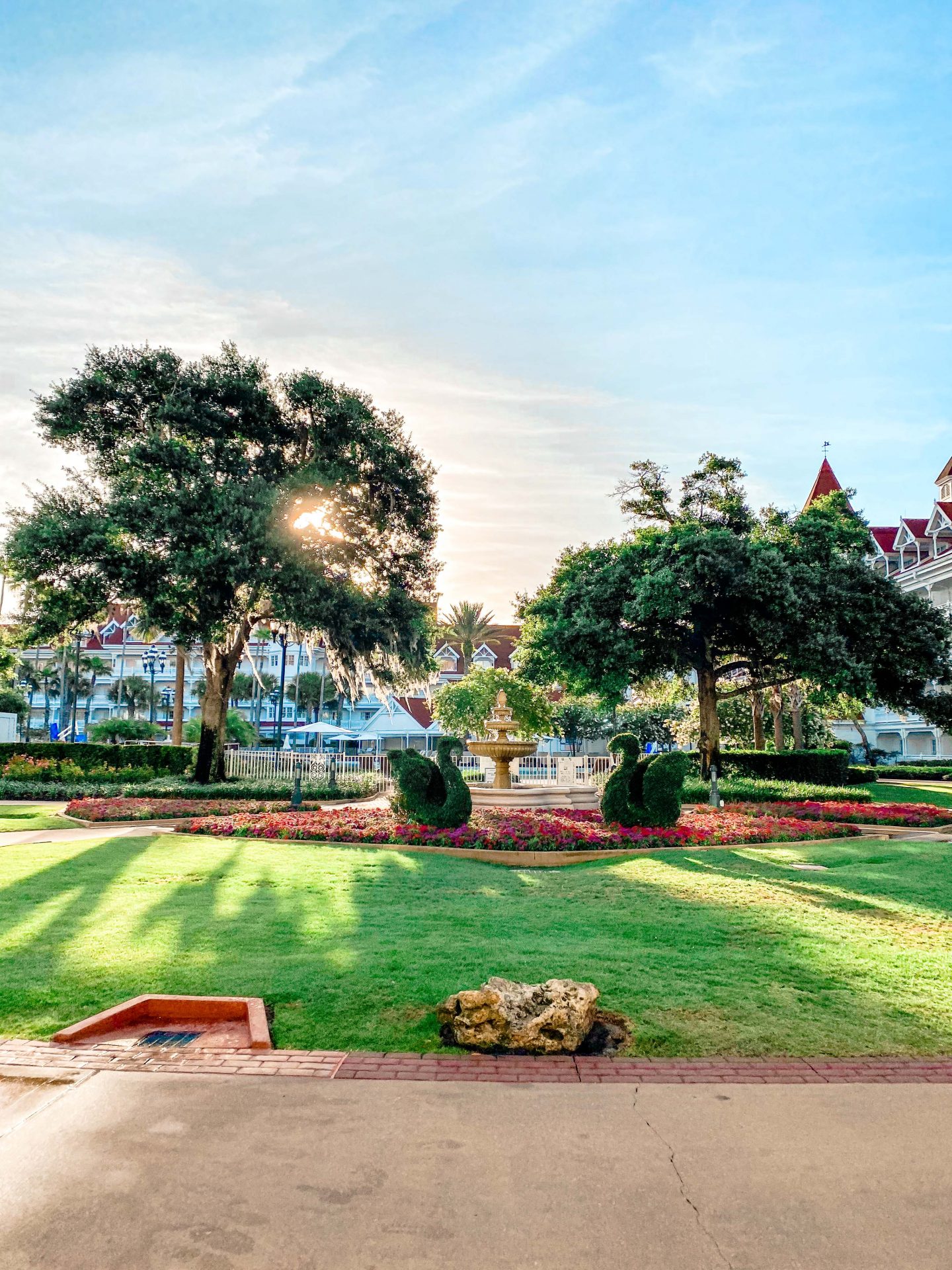 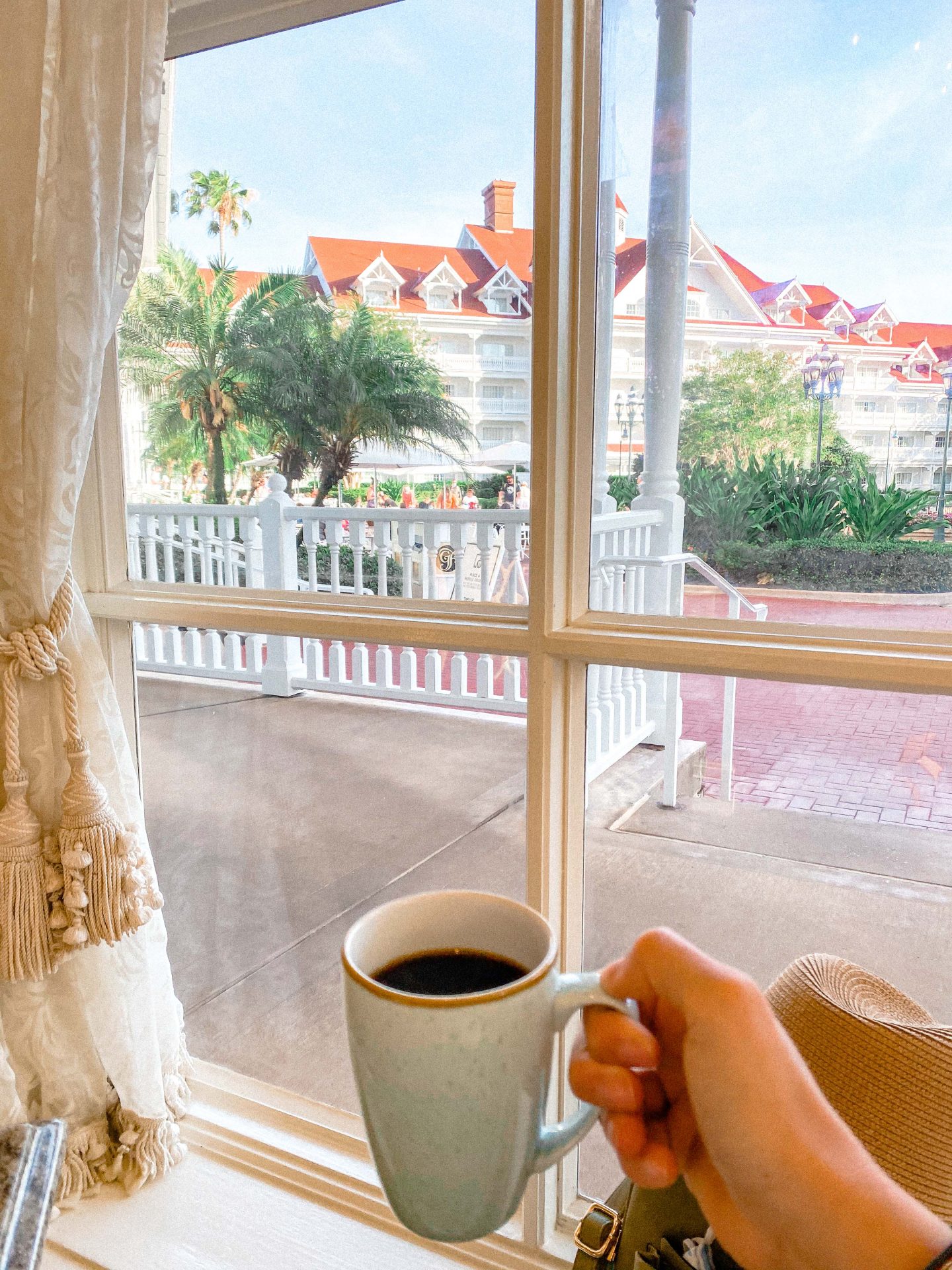 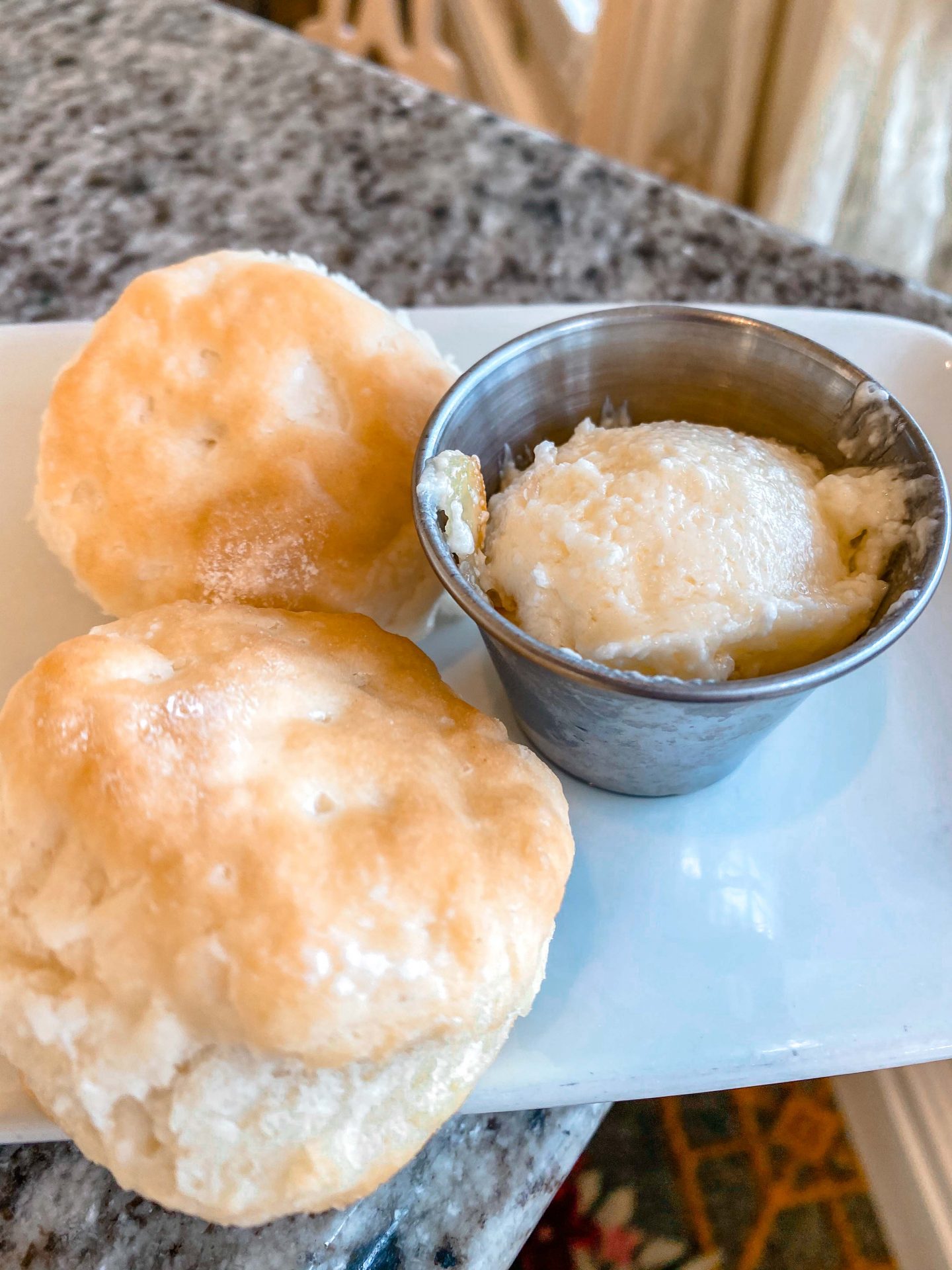 Breakfast at the Grand Floridian Cafe

The food at the Grand Floridian Cafe was absolutely delicious and one of the best breakfasts spots! I am totally adding this to the top three. It’s up there with Tonga Toast at the Kona Cafe and the breakfast buffet at Boma. 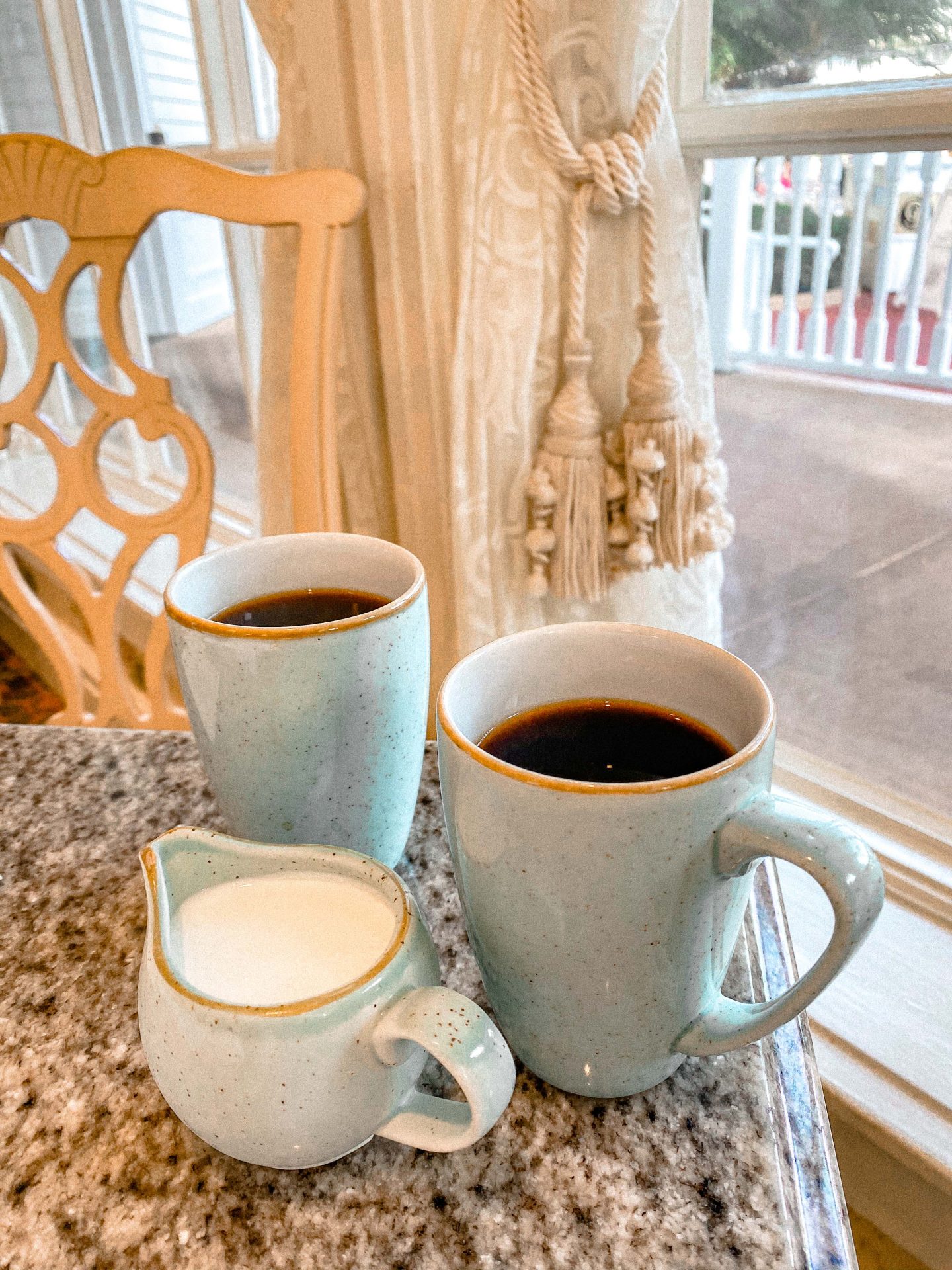 Let’s talk about the coffee!

I don’t know if it was all the park-hopping and lack of sleep, but that coffee was amazing! 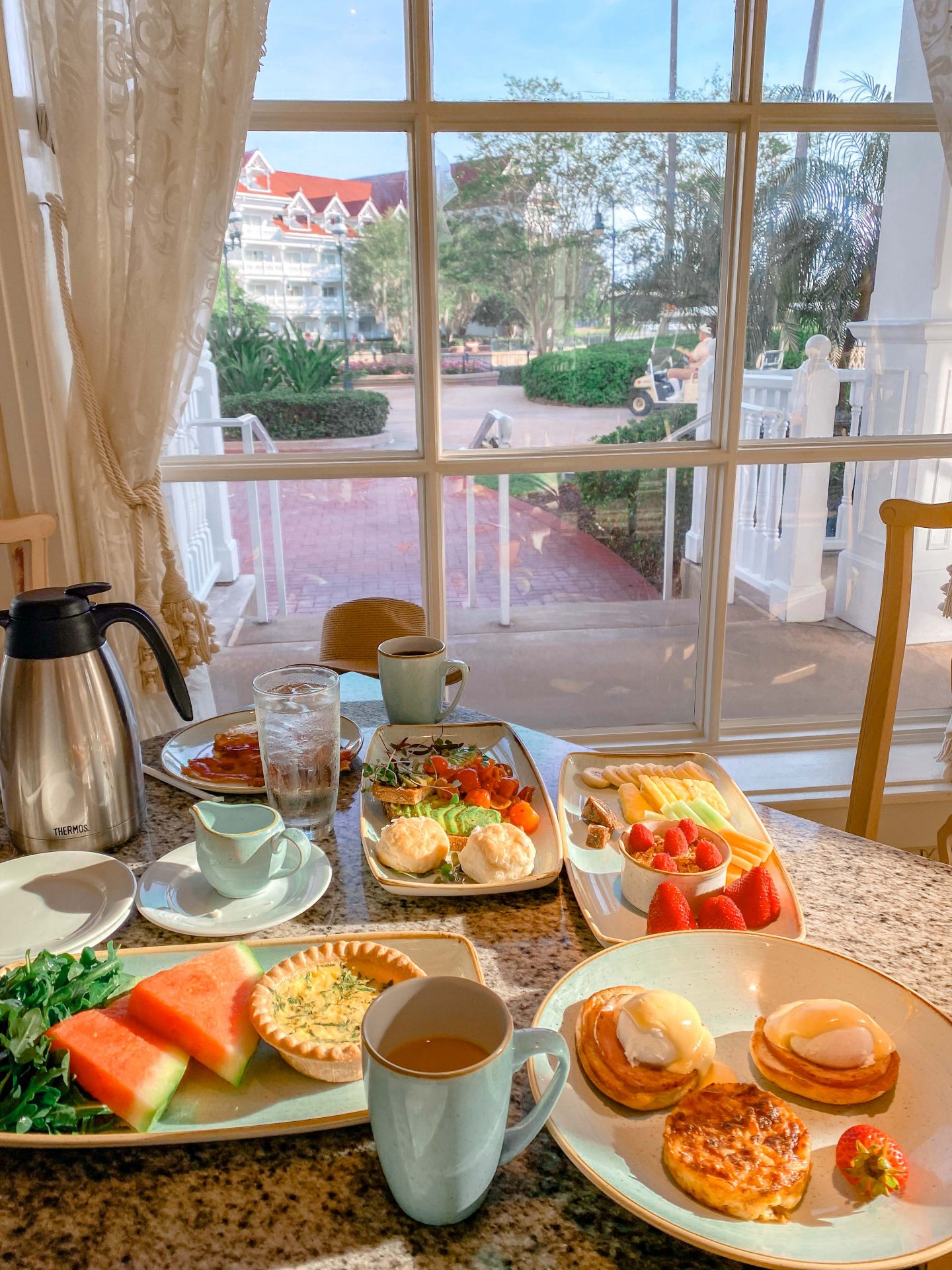 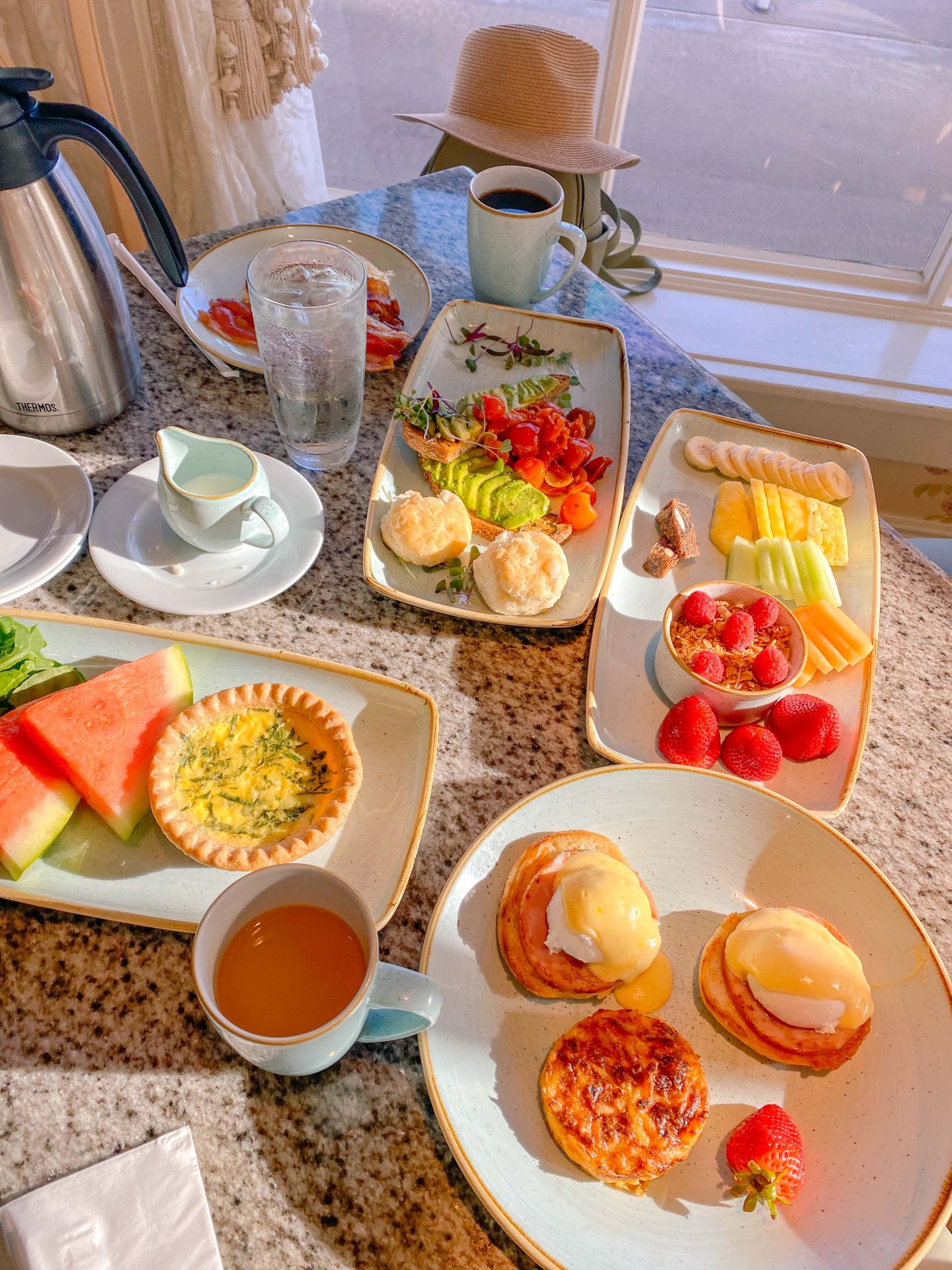 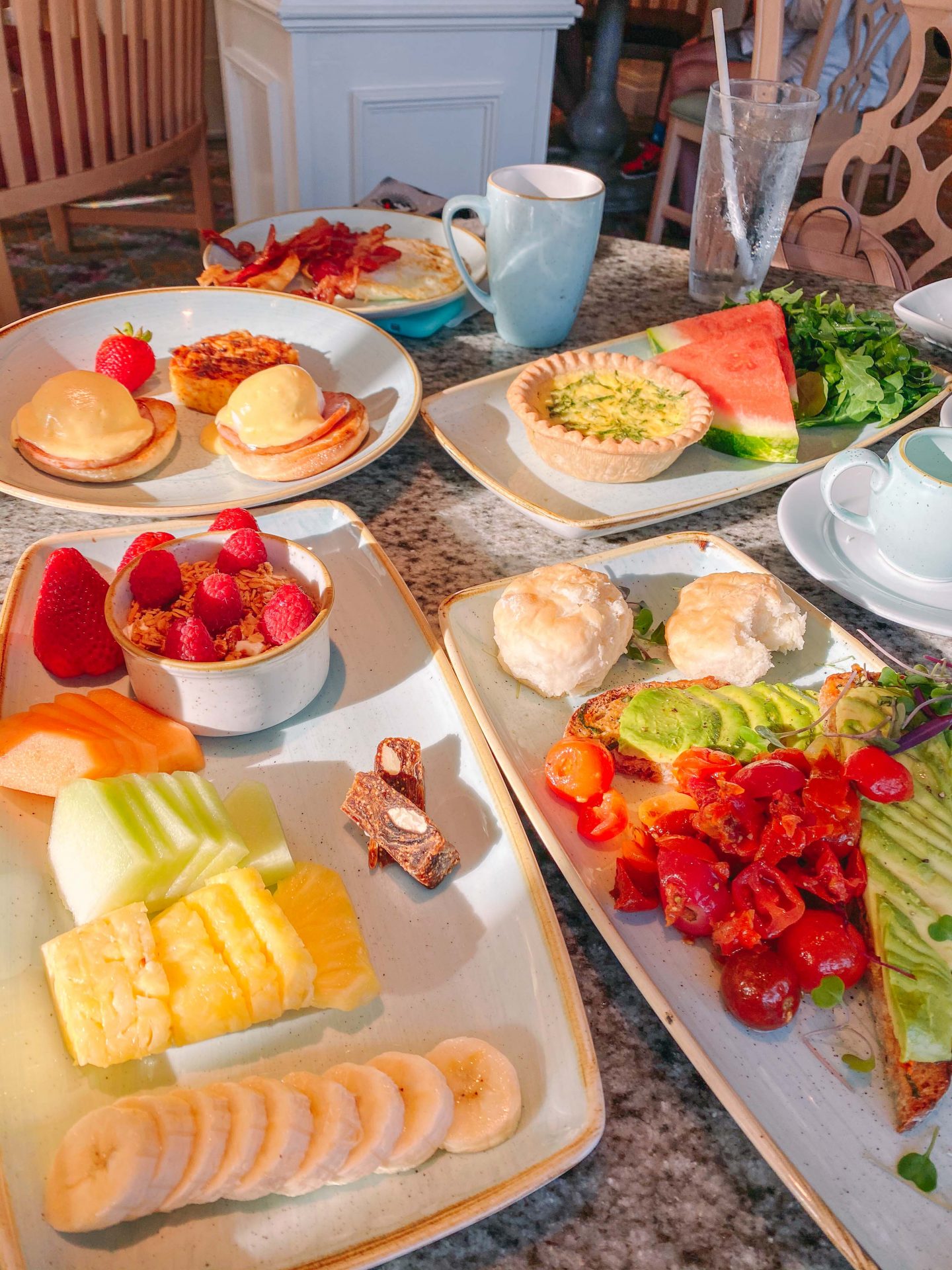 We didn’t hold back with our order.

First, they bring out biscuits and butter to go with your coffee while waiting for your food.

Two-poached Eggs, Toasted English Muffin, Canadian Bacon, and Hollandaise served with Marinated Tomato Salad.
Bacon and eggs on the side! Every time we took a bit of something, we couldn’t stop raving about it! 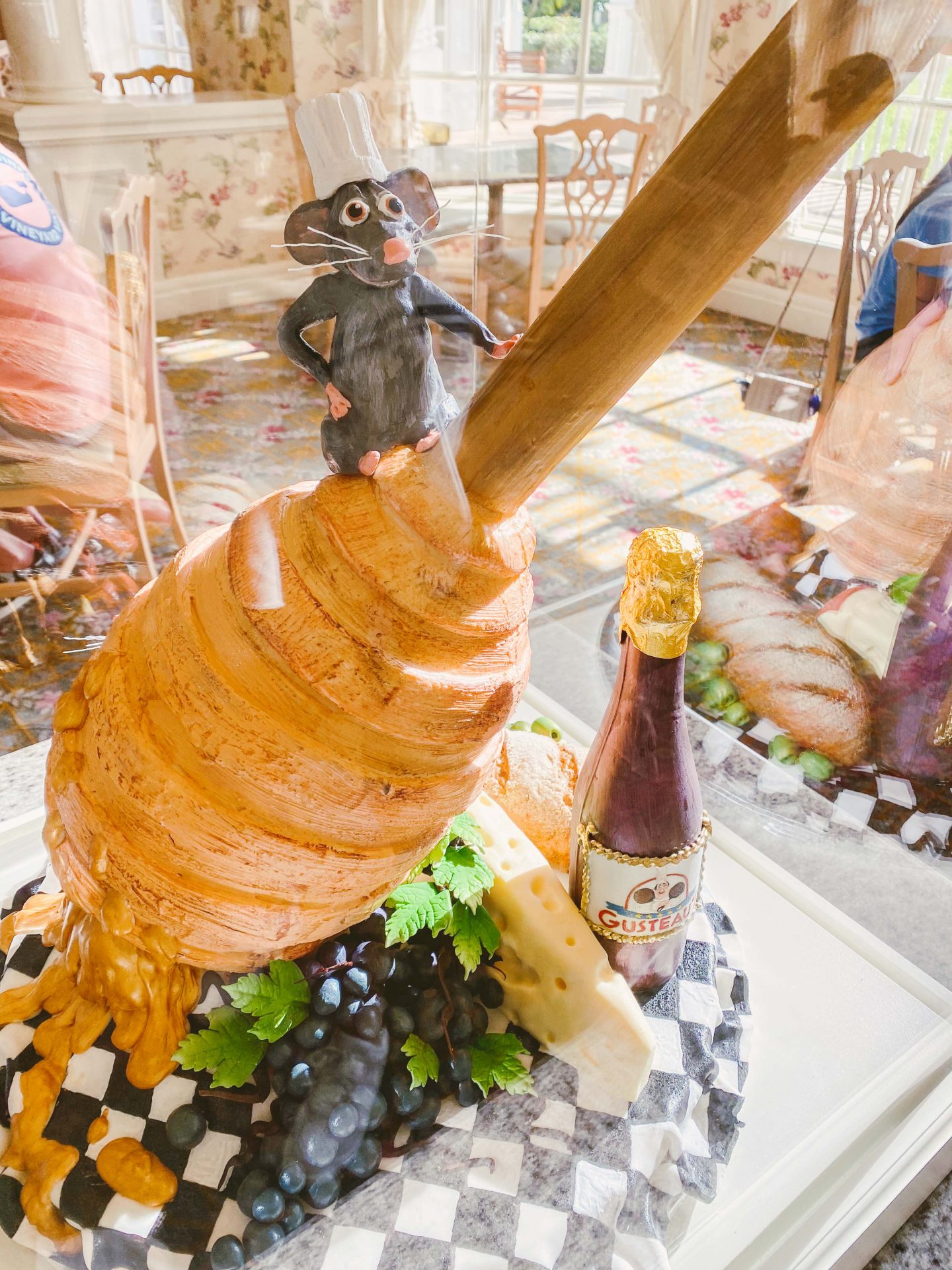 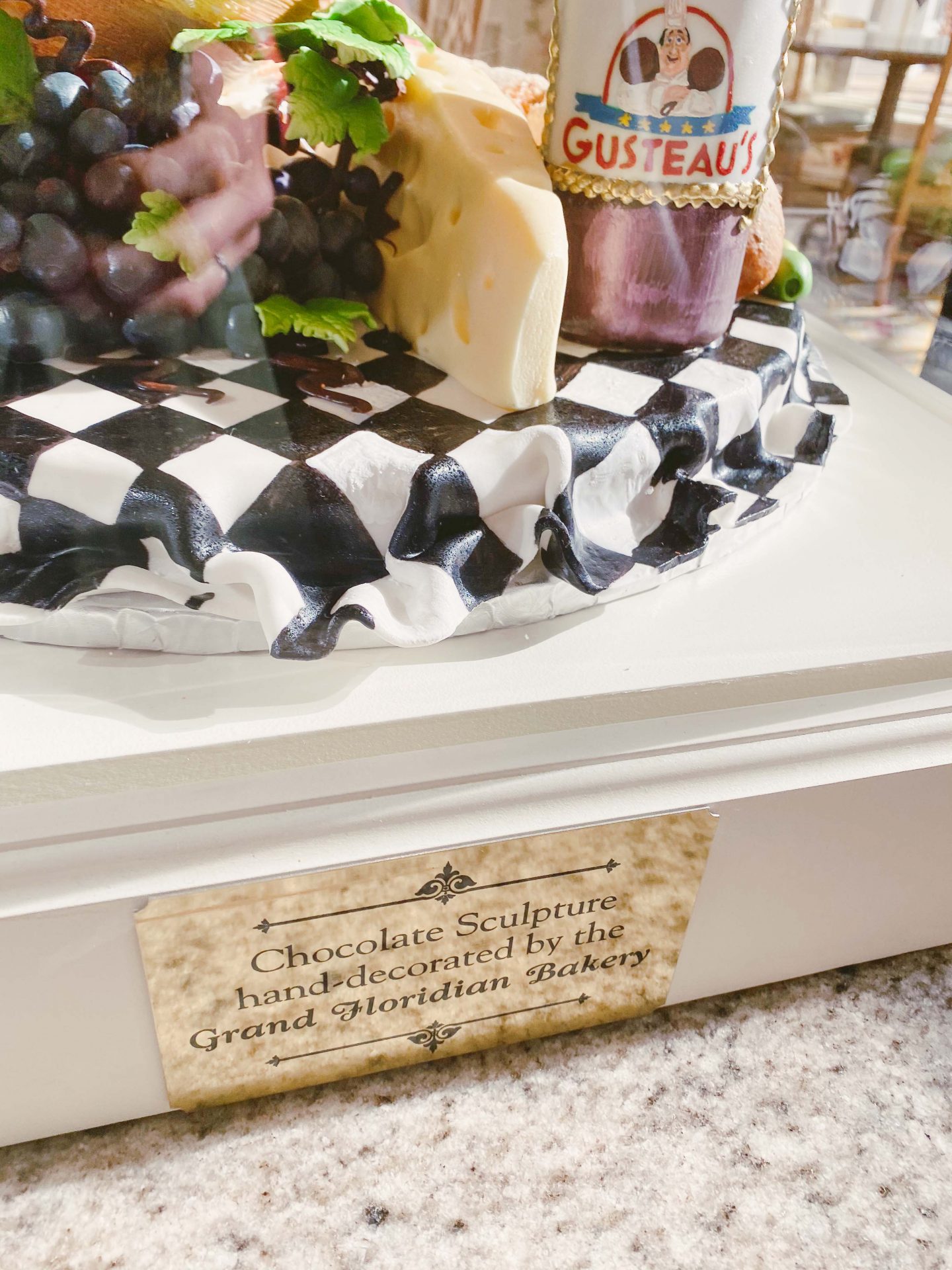 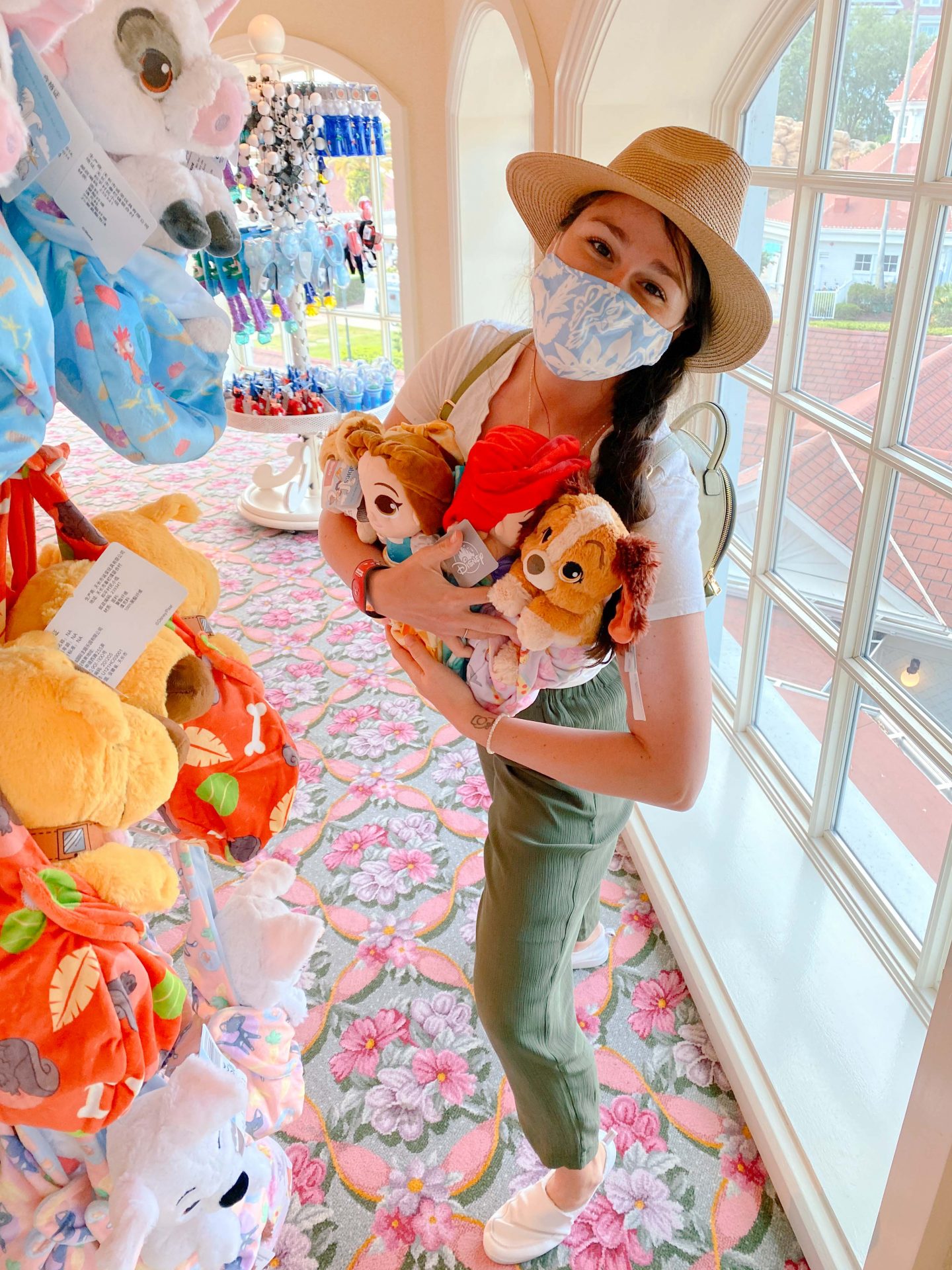 We picked out a few things at the gift shop and then headed to Hollywood Studios for the afternoon! 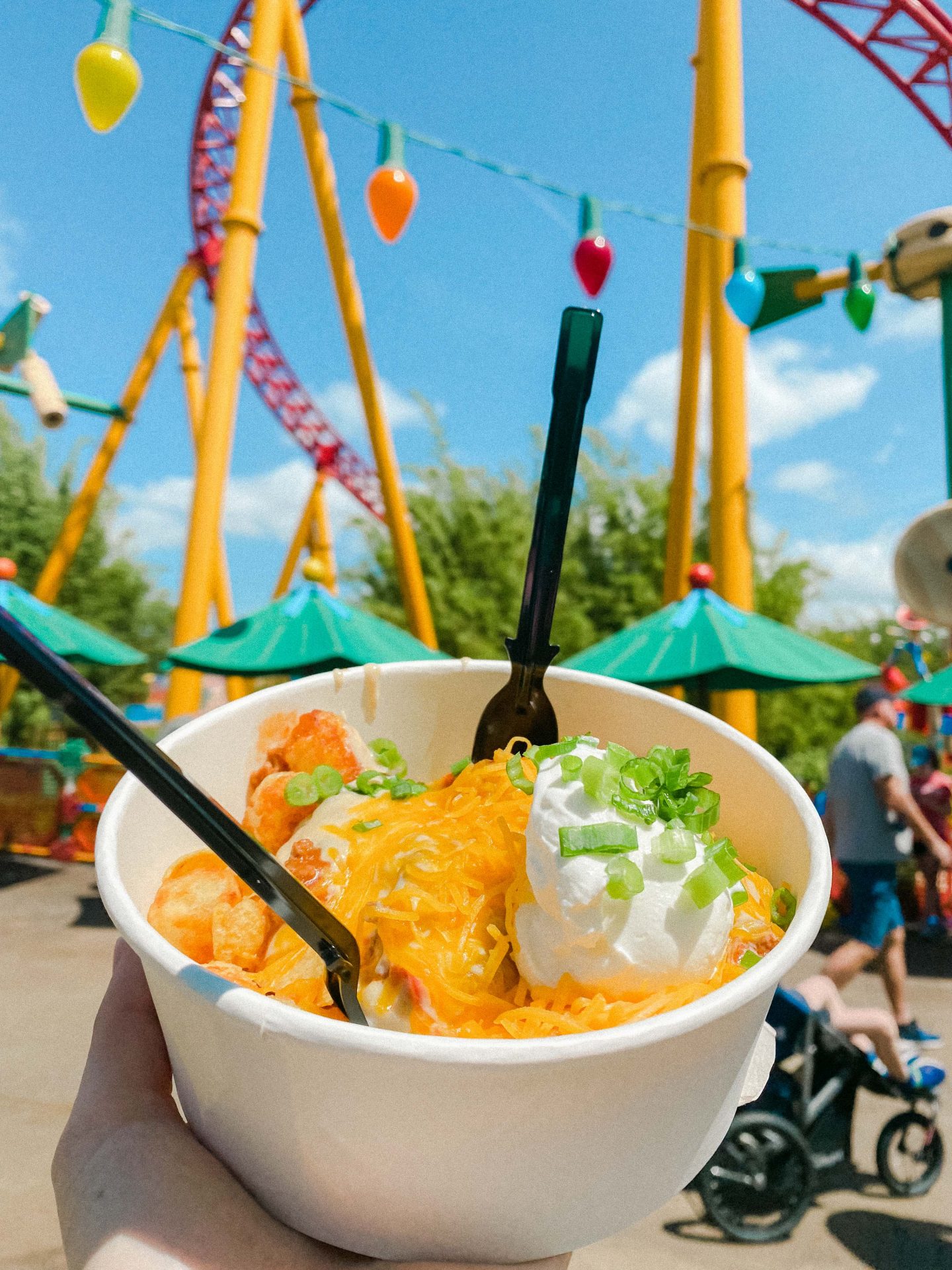 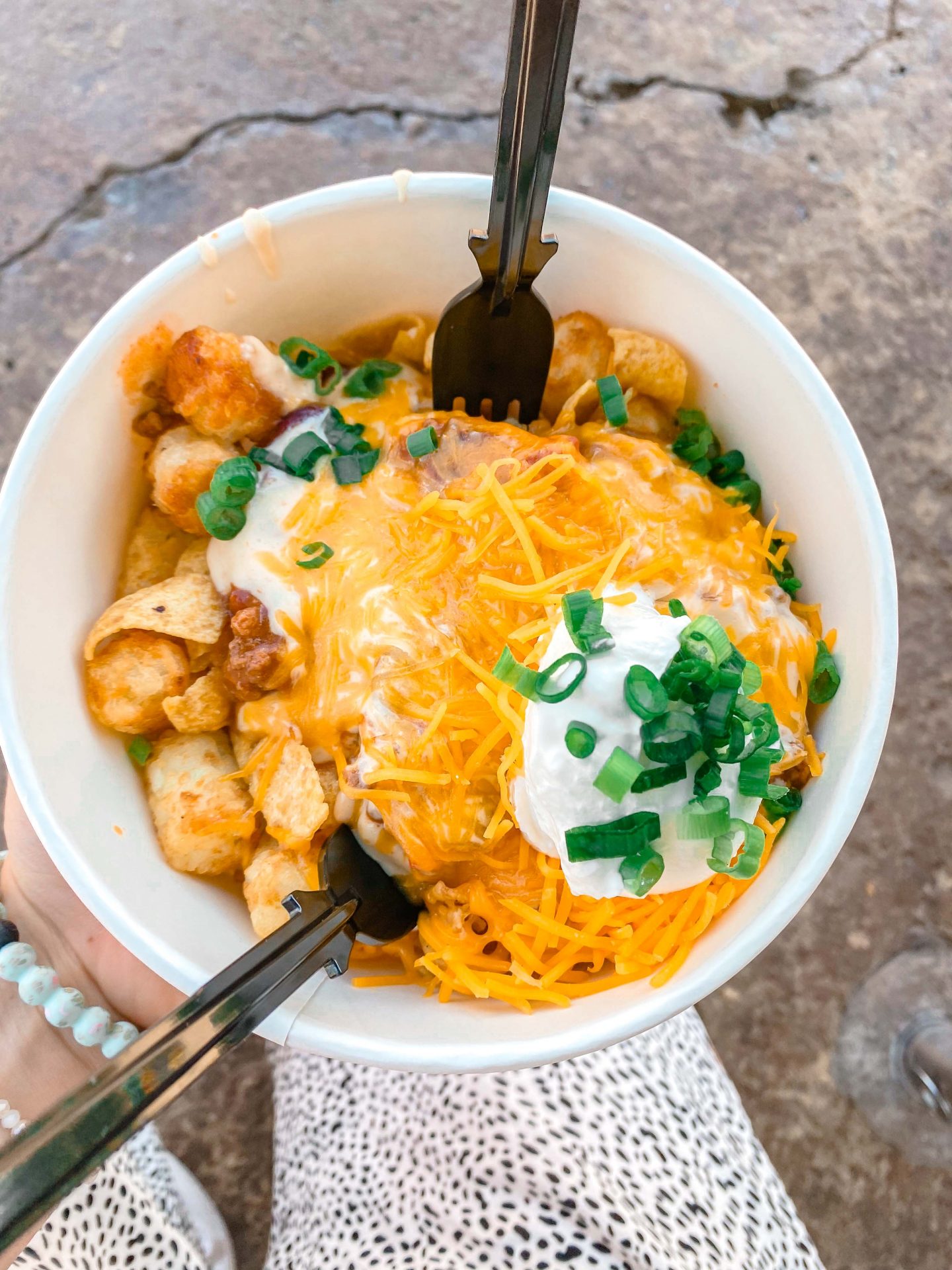 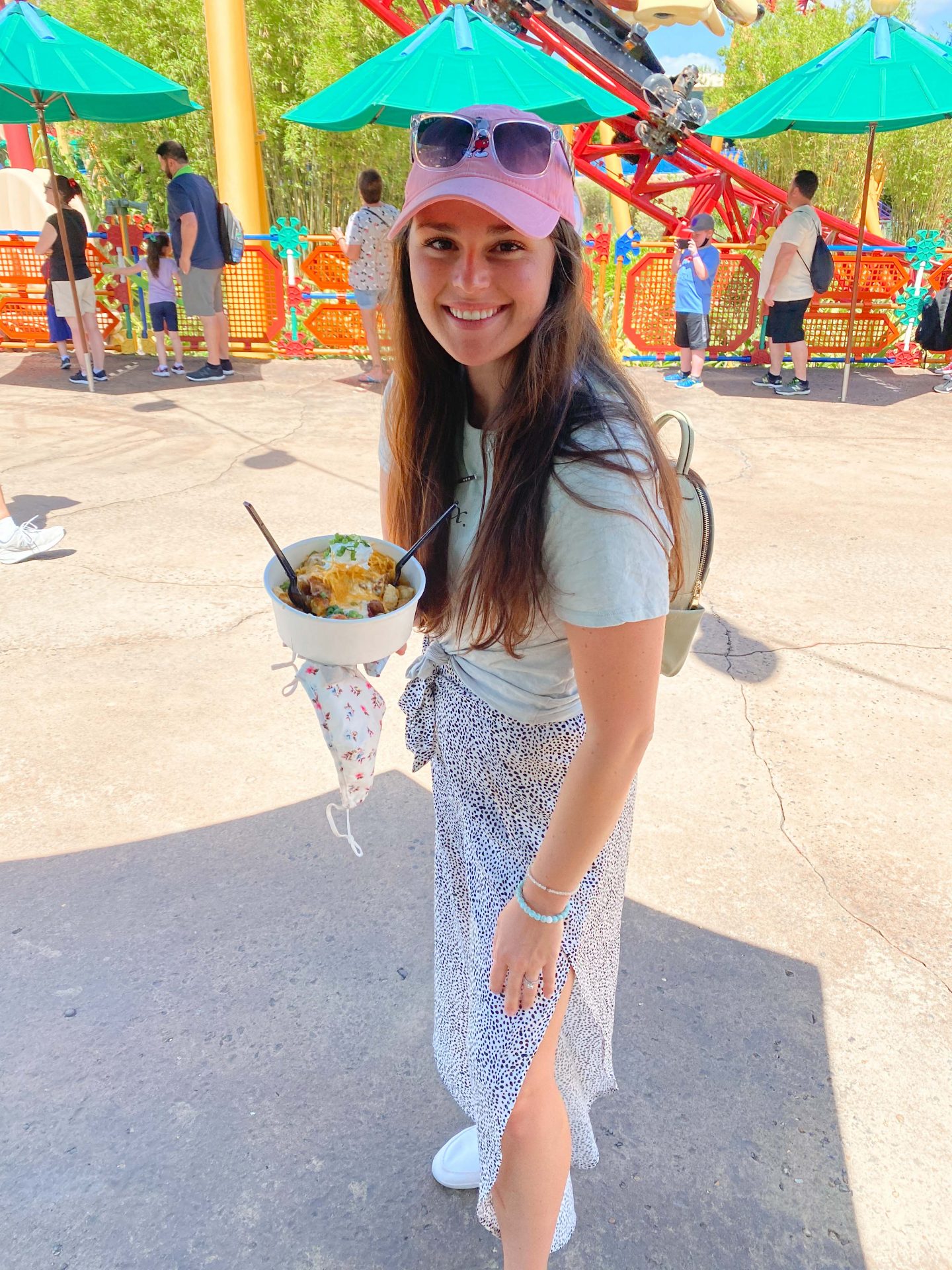 As if breakfast wasn’t enough! When you’re at Disney World, you do SO MUCH walking that it works up an appetite, and we always shared our meals to help save room for the next.

We tried the Totchos at Woody’s Lunch Box. I WAS SO EXCITED about these! I plan to make them this weekend for fun. The totchos are tater tots coated with beef and bean chili, shredded cheese, signature queso, tomatoes, corn chips, sour cream, and green onions! Highly recommend adding ketchup, too 😆 Make sure to order these as soon as they open; otherwise, the wait time to pick them up could be hours! I placed the order as soon as Woody’s Lunch Box opened up. 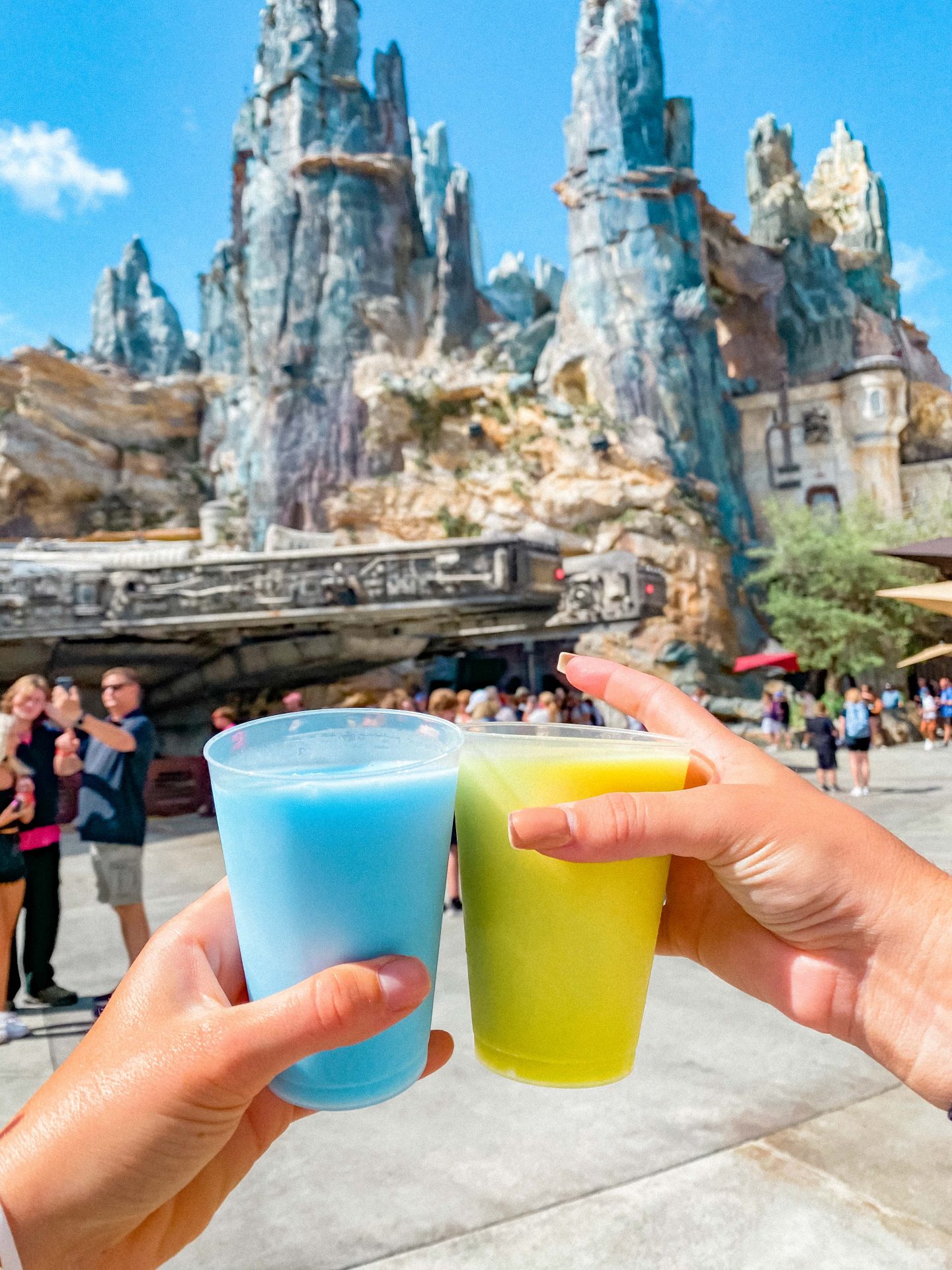 I am going to make an entire blog post all about Star War’s Galaxy’s Edge. We spent a few of our days here, so it deserves its own post! We did get to do blue milk
after riding the Rise of Resistance and the Smugglers Run. Even if you’re not a fan of Star Wars, it’s still so much fun! Oh, and the verdict on the blue milk? Not that bad, actually! 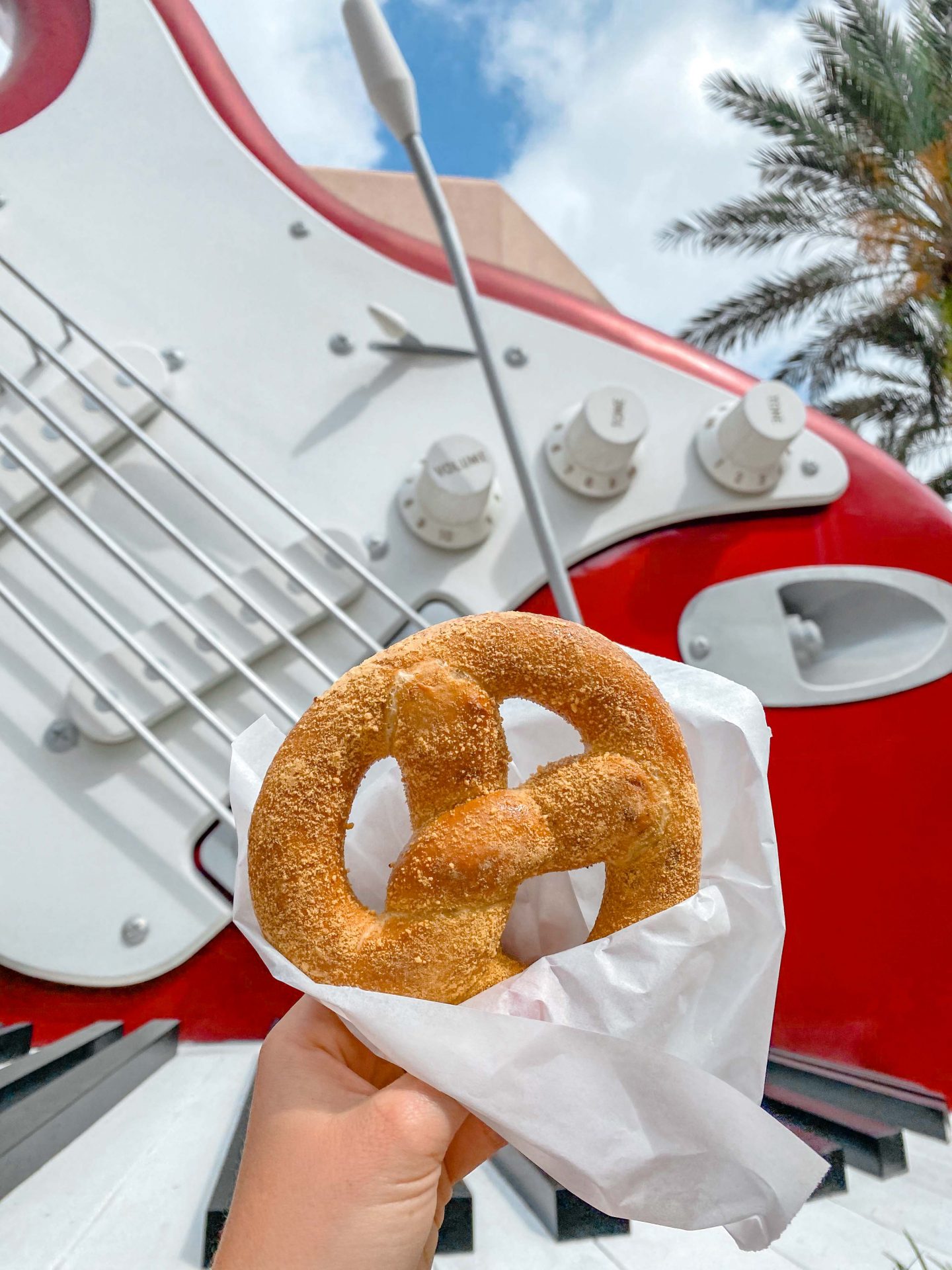 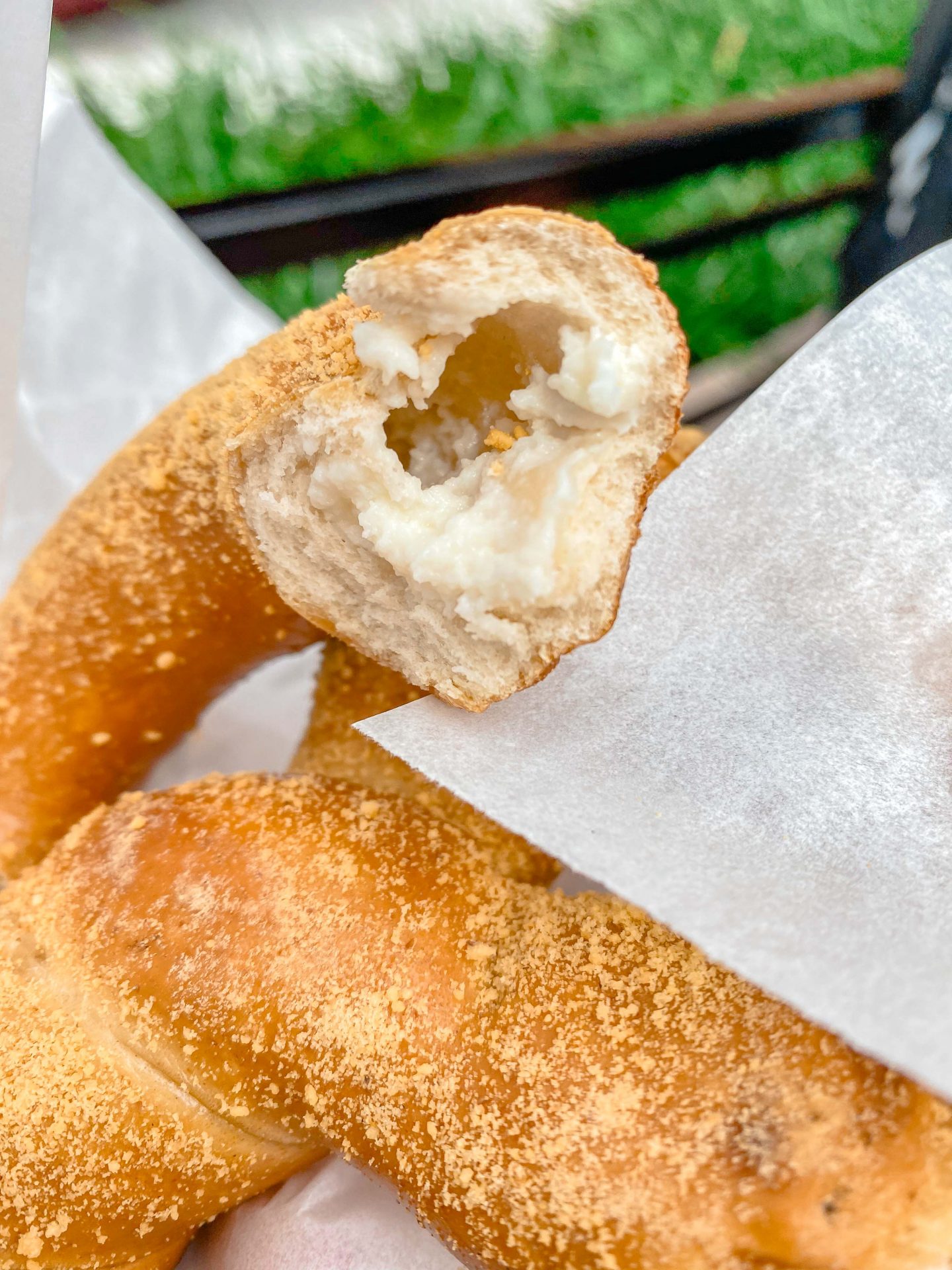 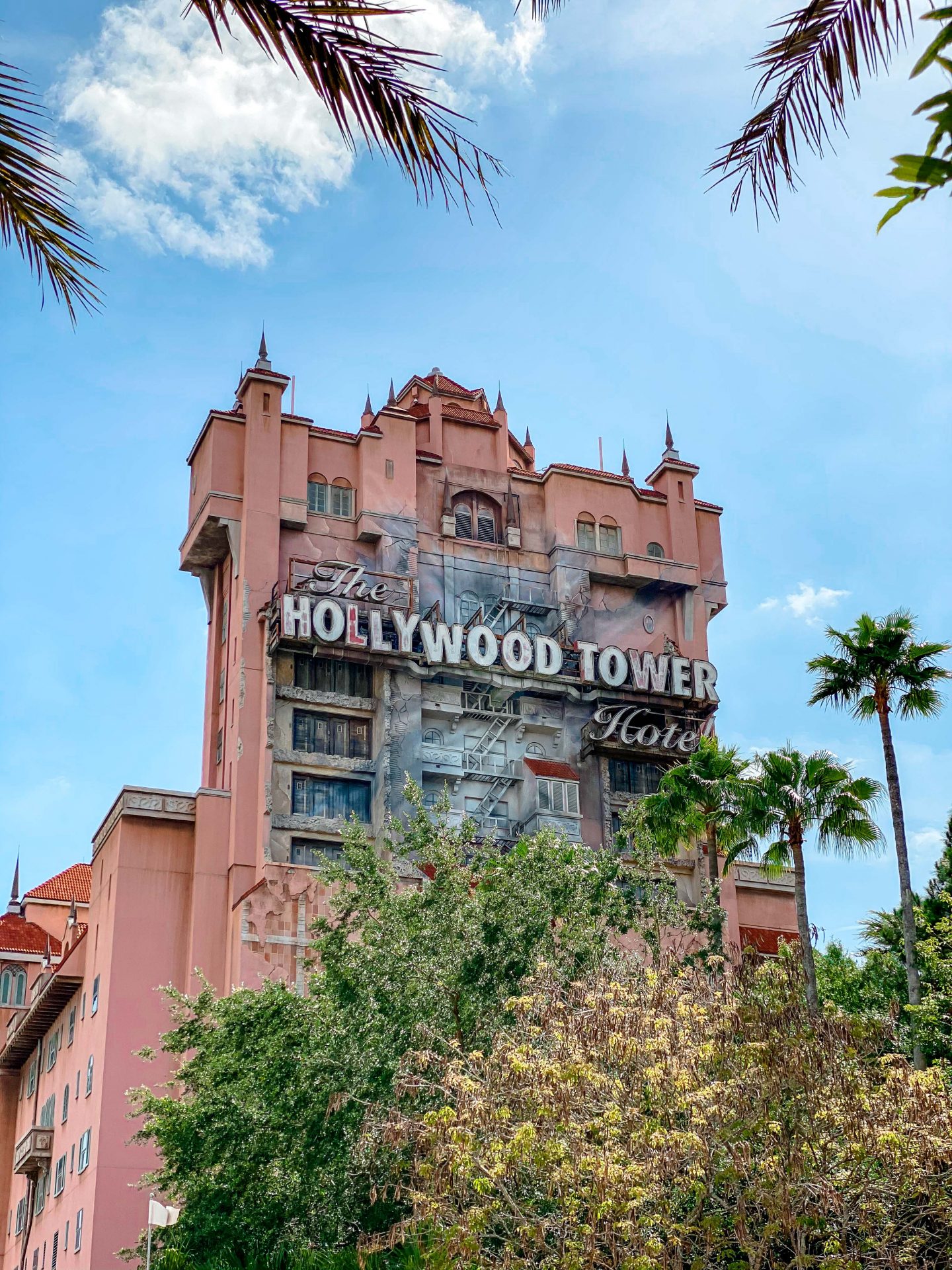 We picked up some desserts on our way out of Hollywood Studios. I had about 50 messages telling me to try the famous carrot cake cookie at Trolley Car Cafe! It was so delicious that I even packed a few in my suitcase for my dad 😝 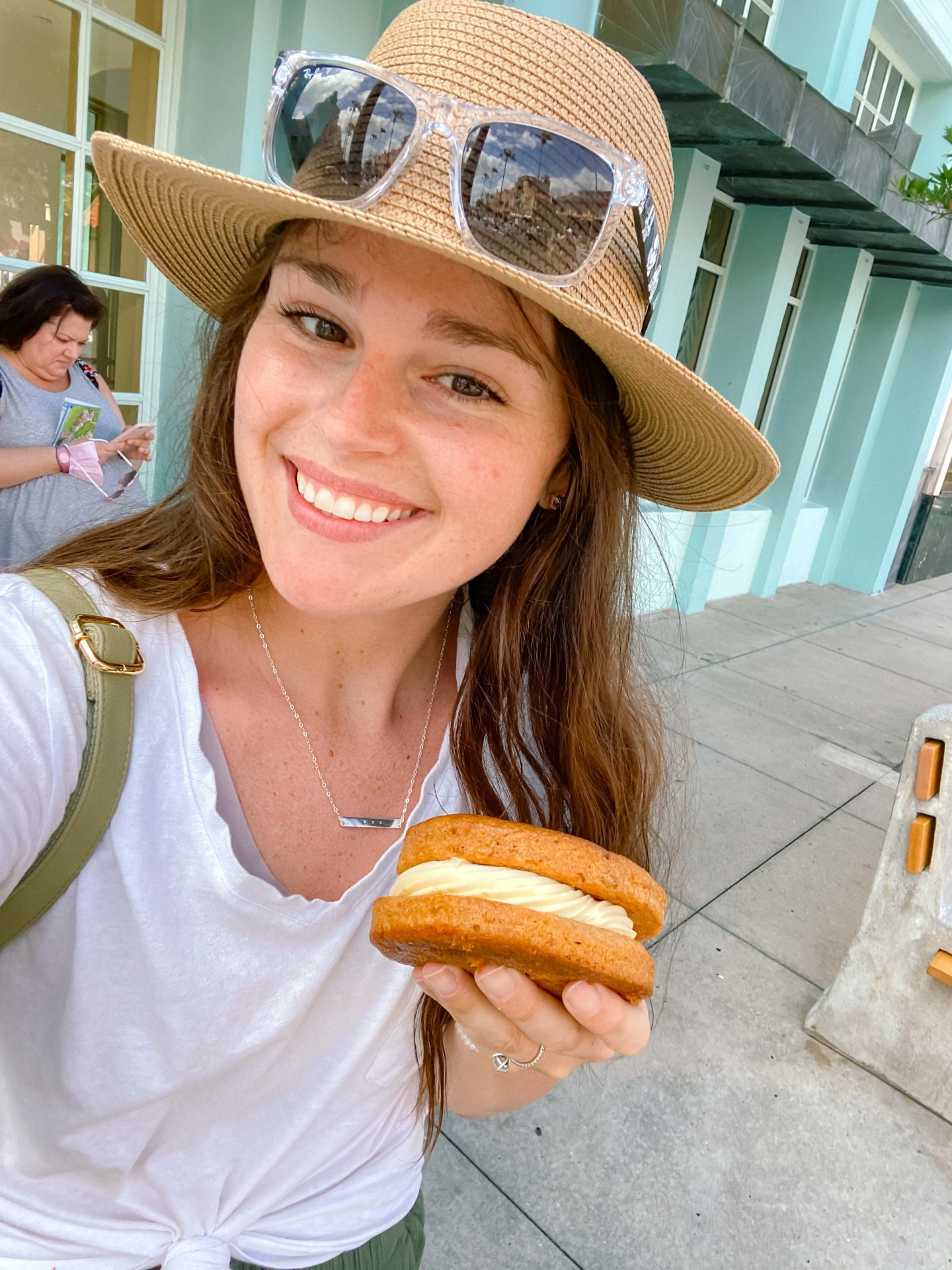 We had the best morning and afternoon at Hollywood Studios! Coming up next is my Animal Kingdom blog!

Our Rehearsal Dinner at the Lake Toxaway Country Club
Gluten-Free Pumpkin Pie with the Flakiest Crust!