Hello! & happy Monday 😊 I’m up early (5 am-early) because I’m playing with a new tennis group this morning. I’m kind of nervous, but also excited! Someone once told me that the body doesn’t know the difference between being nervous or excited, so I’ll just say I’m excited. I wanted to have some time to drink coffee and get my recap done before heading out to walk the dogs and to go play tennis. It’s going to be a busy week, but the fun kind of busy. I’m leaving for a trip on Wednesday, and I can’t wait to take a bunch of pics and share everything with you.

Before I start the recap, I wanted to say thank you for all the sweet words in that last recap blog regarding my thoughts on Instagram. It was unexpected to see so many of you relate to how I was feeling. You put a lot of things in perspective for me, and being able to talk about things like that with my readers is why I love this platform! 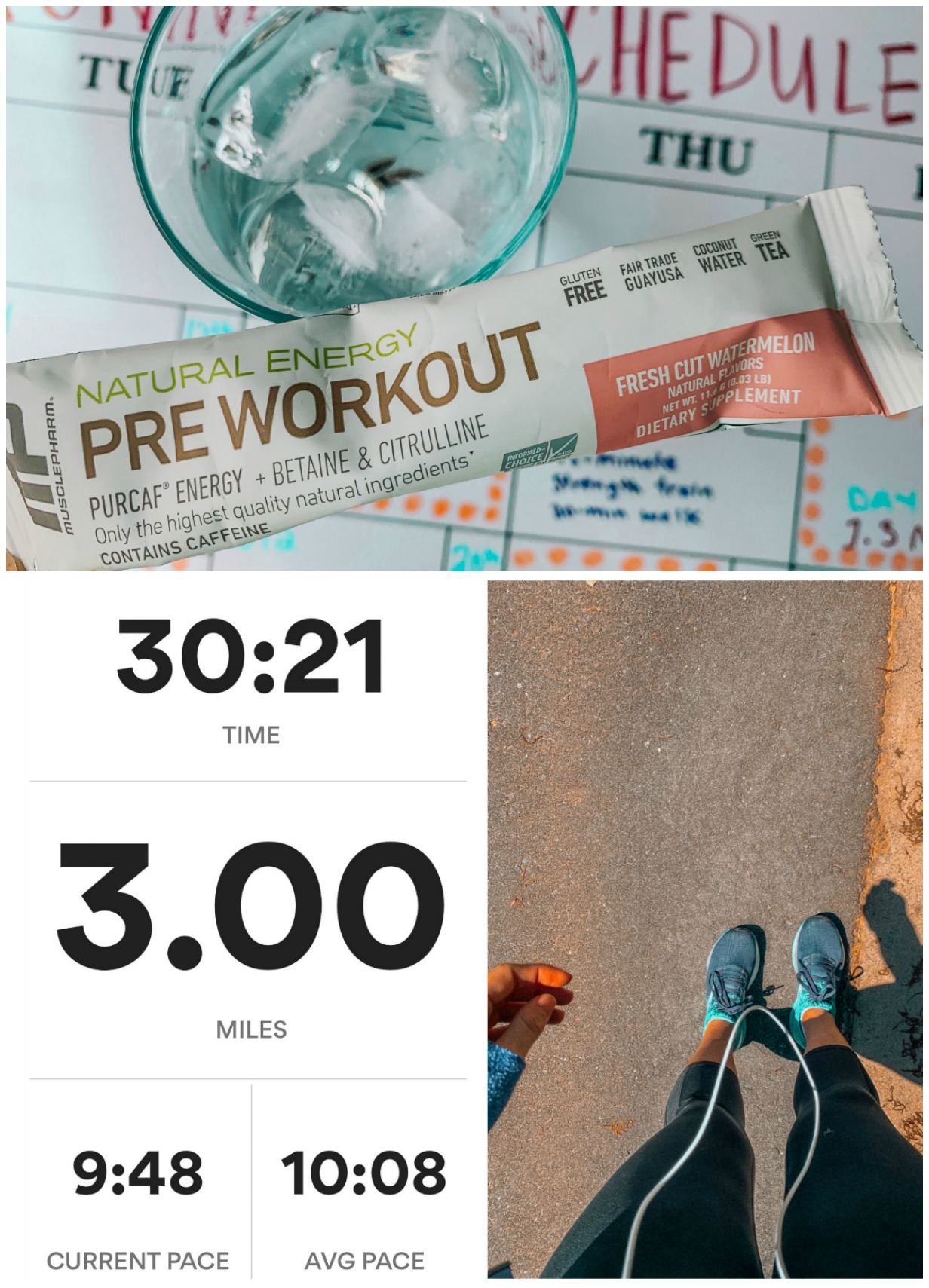 Last week was very successful in the running department, and my running post will be live on Wednesday! I’ve had many requests for a post on my journey from the couch to a 5k.  I’m looking forward to sharing the plan. I think you’re going to love the printout.

I had a stressful Monday morning. Things weren’t running smoothly on the blog’s backend, so I had a call with a web developer to get it all worked out and do a couple of audits. I’m excited to work with him to make things run smoother! We have a call later this afternoon to go over more of the issues that need fixing.

I decided to take a break from computer work, and head out on my run! Back in the day, running was my outlet for when I had anxiety, or when I felt overwhelmed. It feels so good to be able to use that outlet again. When people ask me why I run, it’s for my mental health. Running for training purposes ruined that mind space for me. The training felt more like a punishment rather than a release. I have been looking forward to running so much lately, and I have to talk myself out of doing it consecutive days, or running further than planned. 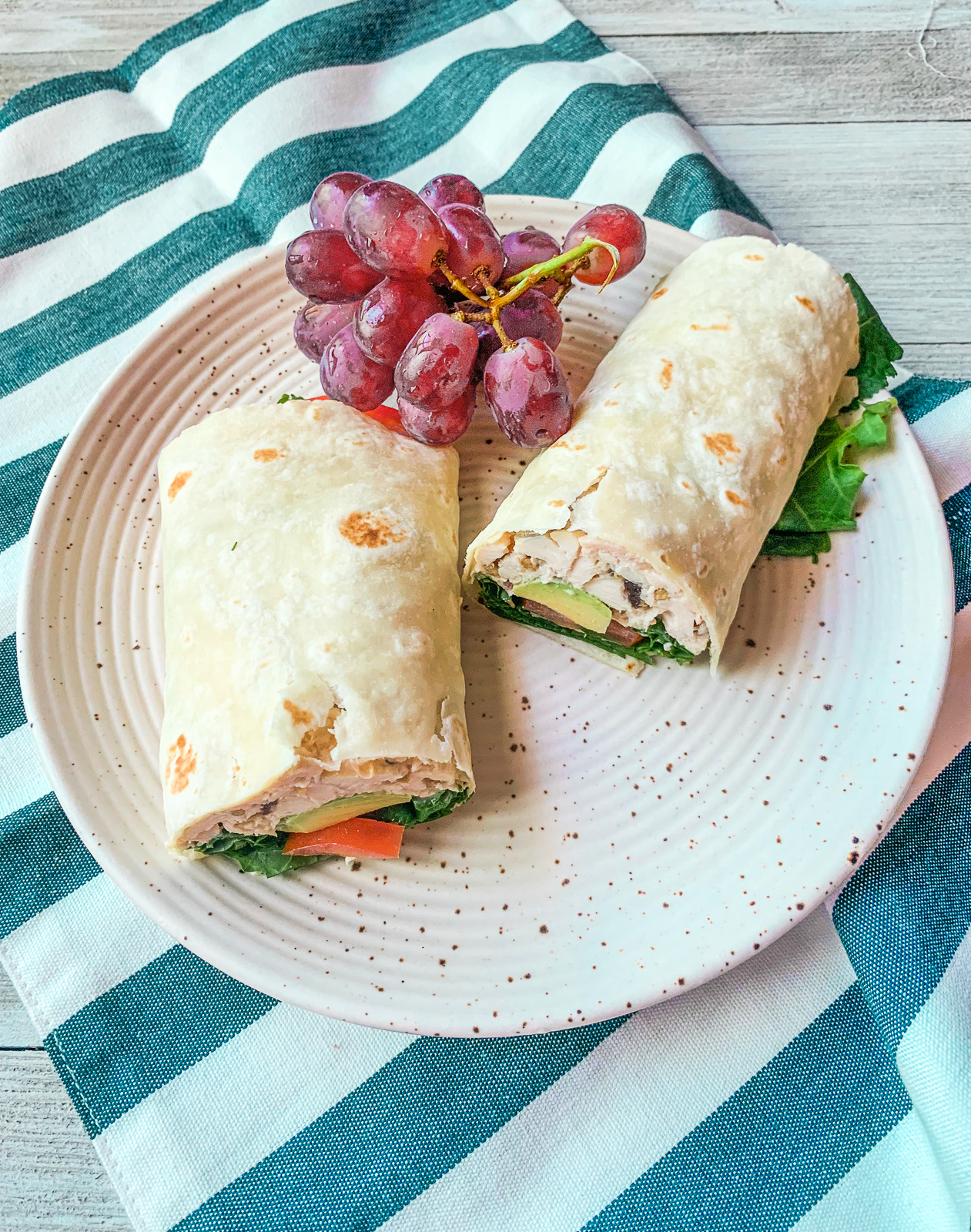 After my run on Monday morning, I had a chicken salad gluten free wrap for lunch. We have made this chicken salad five times in the past week! We cannot get enough. The wraps are the gluten-free mission wraps, and I’m blown away with how good they are. They are by far the best gluten-free wraps I’ve had. I’m going to use them in a chicken tortilla soup soon.

After lunch, I finished up the recap post and finally got that up! 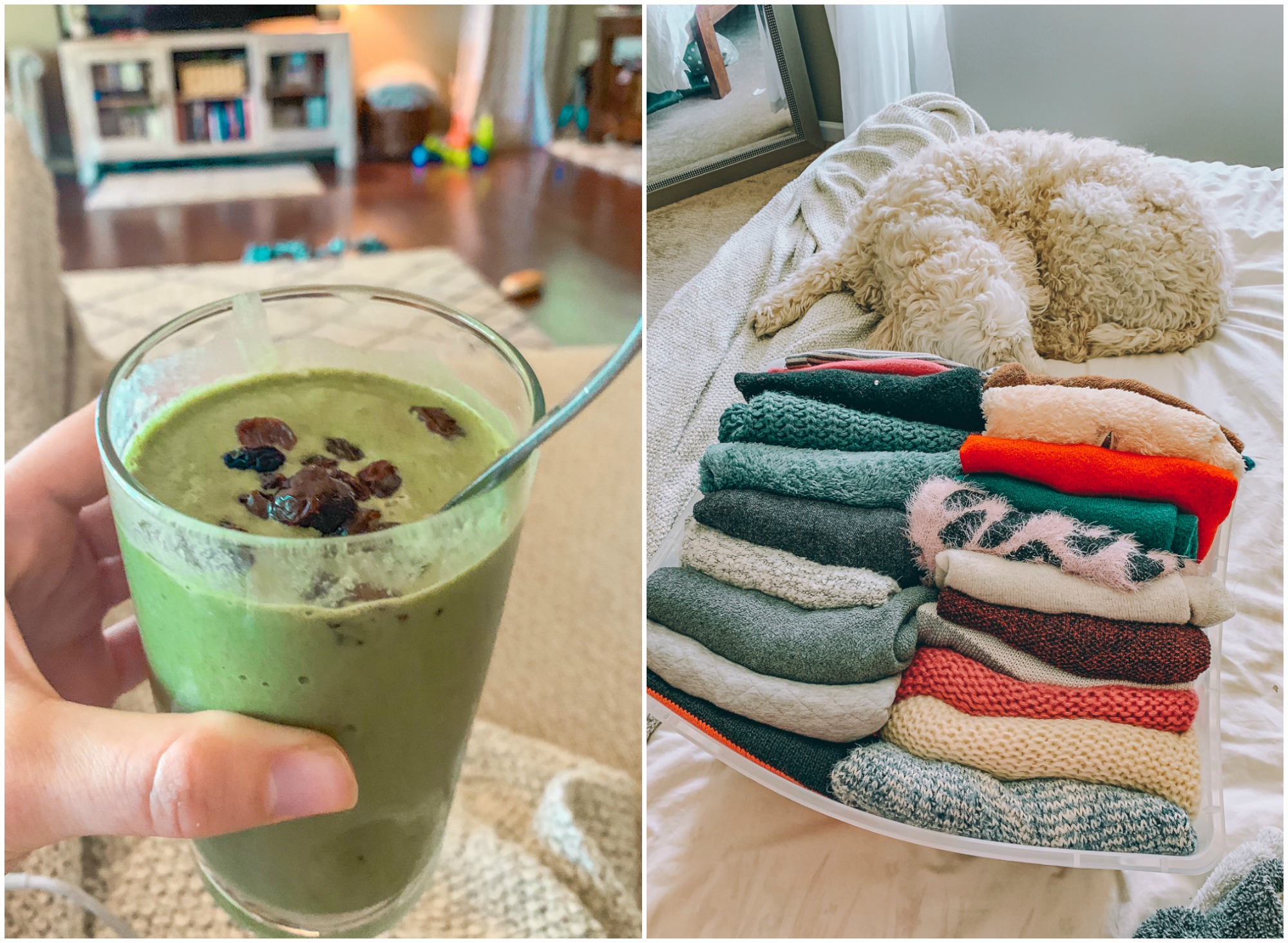 On Tuesday afternoon, I worked on changing out the winter and summer clothes. It felt good to put all the sweaters away and hang up the sundresses and shorts.

When I was finished, I had a protein shake for lunch. It had kale, Amazing Grass Green Superfood powder, almond milk, protein powder, ice, banana, and kiwi. 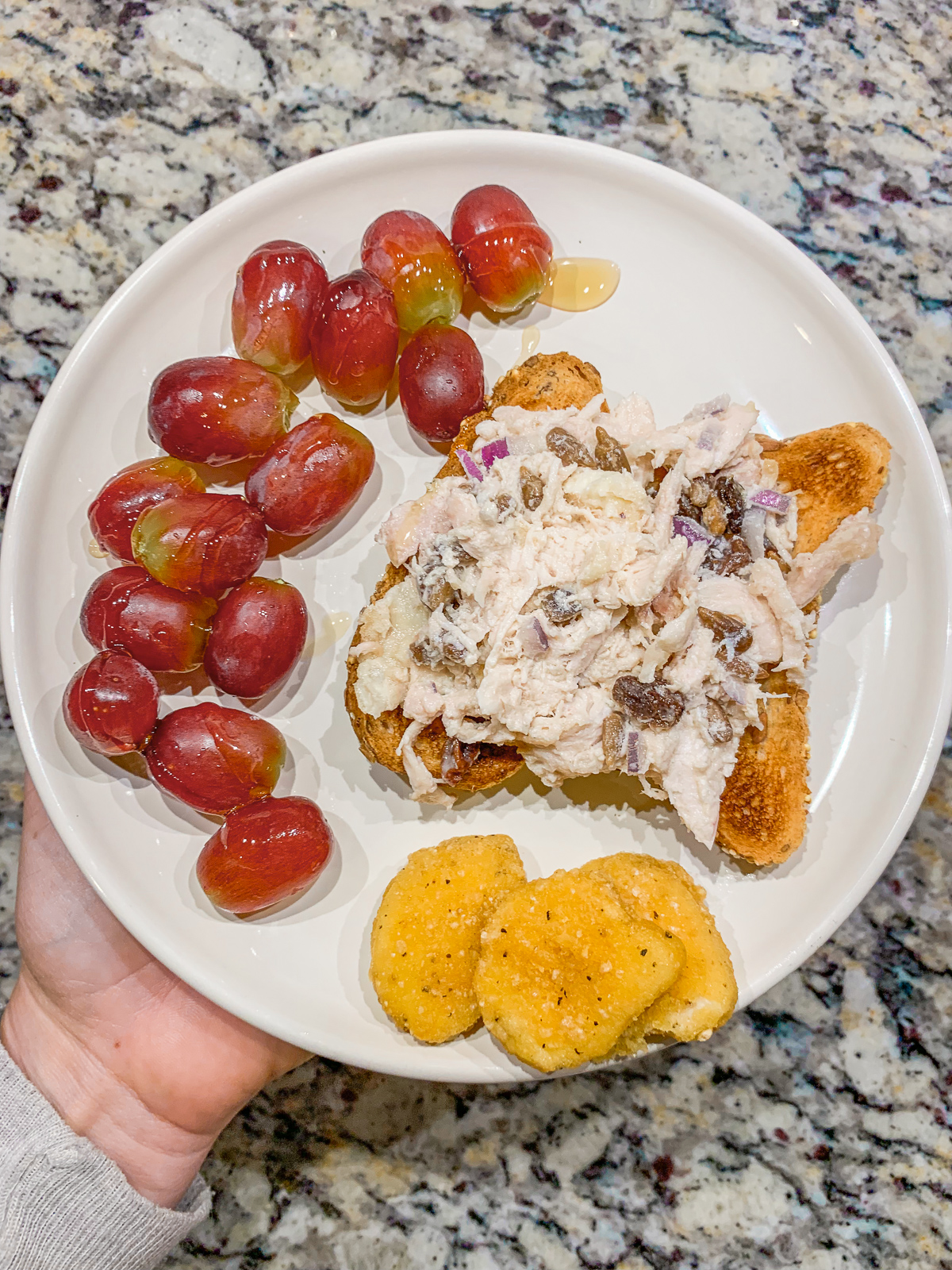 I went on a few walks with the dogs and then spent my evening editing the running video.

For lunch, I had the most random plate, but you guys know that’s how I roll! I had grapes with honey, a slice of gluten-free bread with my chicken salad recipe, and three microwaved Applegate chicken nuggets. 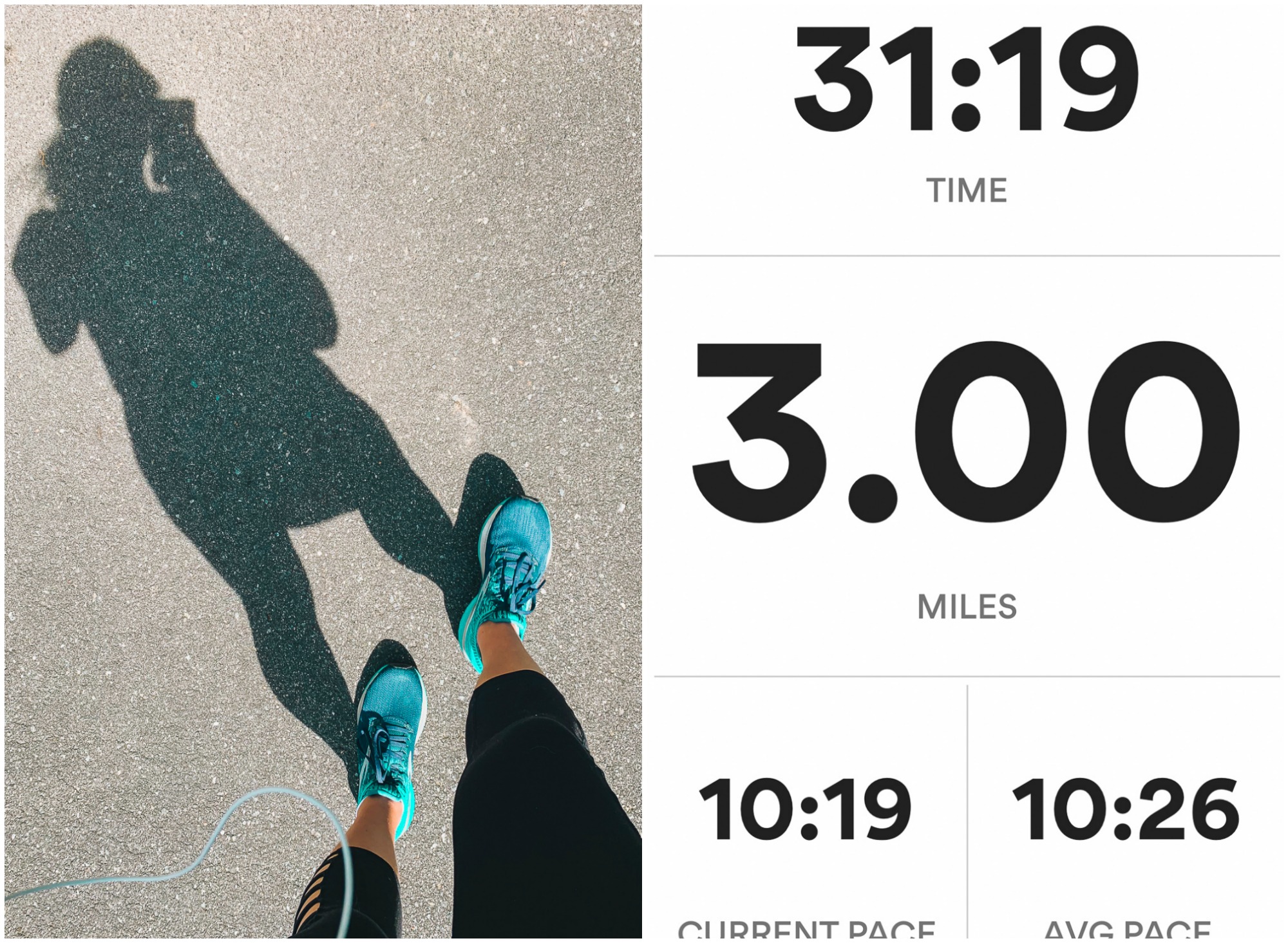 The weather was perfect on Wednesday morning. After walking the dogs and having my breakfast, I decided to fit in my scheduled three-mile run. I keep telling myself that I’m going to go for a run in a new location without hills, but it’s just so much more convenient to step outside and go for a run without adding all the extra driving.

The run went great. It’s crazy that three miles are tough for me now. As soon as I hit 2.4, I’m always ready to slow it down and quit. I’m excited to see how many more runs it takes before I’m feeling comfortable at the 3-mile mark again. 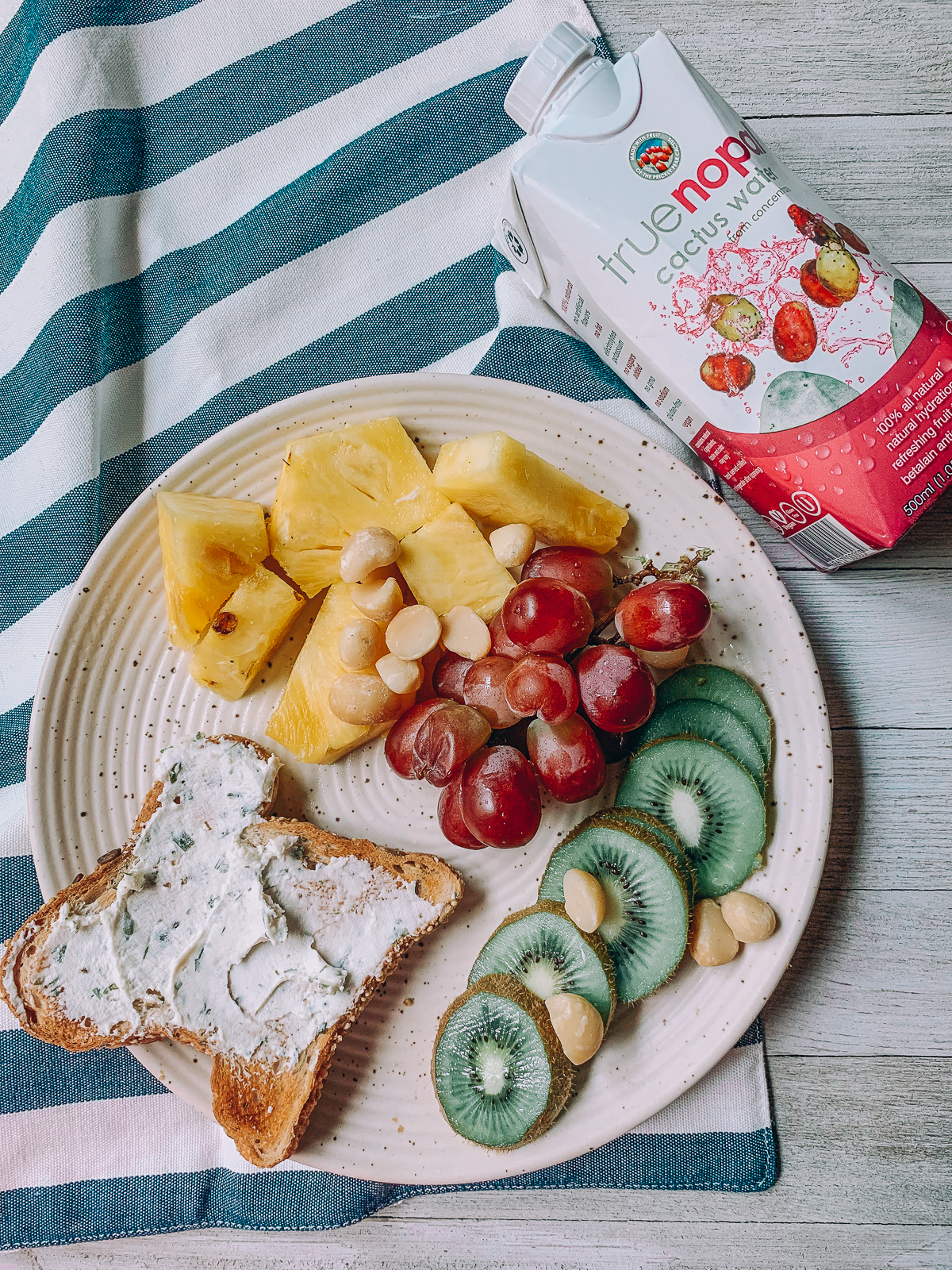 For lunch, I had gluten-free toast with Kite-Hill chive cream cheese, kiwi, grapes, pineapple, honey, and macadamia nuts. I’ve been drinking TrueNopal after running lately to help with hydration! I get so hot out in the sun since I run in the middle of the day. Cactus water is a great way to rehydrate and contains wayyyyy less sugar than coconut water.

I used to have stomach aches nearly every single night, discomfort from bloating, and always felt too sluggish to do anything. I was talking to a dietician that recommended that I cut my raw vegetable intake in half and try taking probiotics each day. It’s been two and a half weeks since taking probiotics every single day and cutting back on all of the vegetables I was eating, and I am in complete shock. I haven’t complained about a stomach ache, bloating, or anything in weeks. Now, I’m not giving up vegetables at all, just limiting the amount I’m eating. If you’re looking for a good probiotic to have every day, I highly recommend the GoodBelly (no sugar added) straight shots! I have been telling everyone about these because they have helped me feel so much better. I take one every day at noon. If you have digestive issues, it’s worth giving it a shot! (no pun intended) I decided to stop out at my parent’s house on Wednesday night, so the dogs could play in the backyard. My mom had been requesting my blueberry muffins, so I made her a batch using this recipe, but added blueberries instead of blackberries, and chia seeds. I used the same recipe without the lemon and blackberry but added chocolate chips for my dad. He’s not a fruit person. I know her doormat says “I hope you brought wine,” but I was hoping the muffins would do 😉 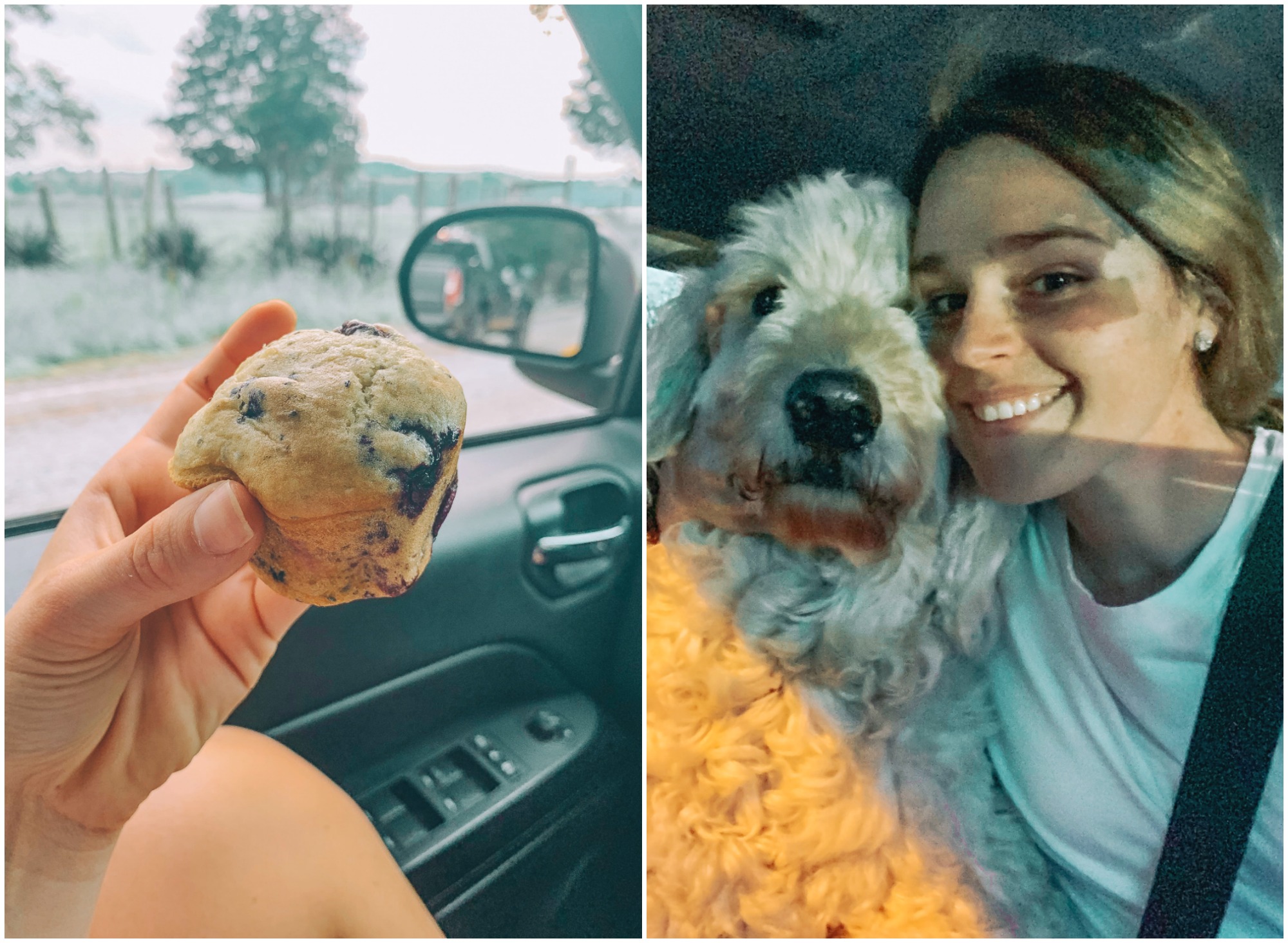 We got stuck in traffic on the back country road (because of construction) so thank goodness I had a muffin in the car! I was so hungry on the way back, and it held me over until I got home. 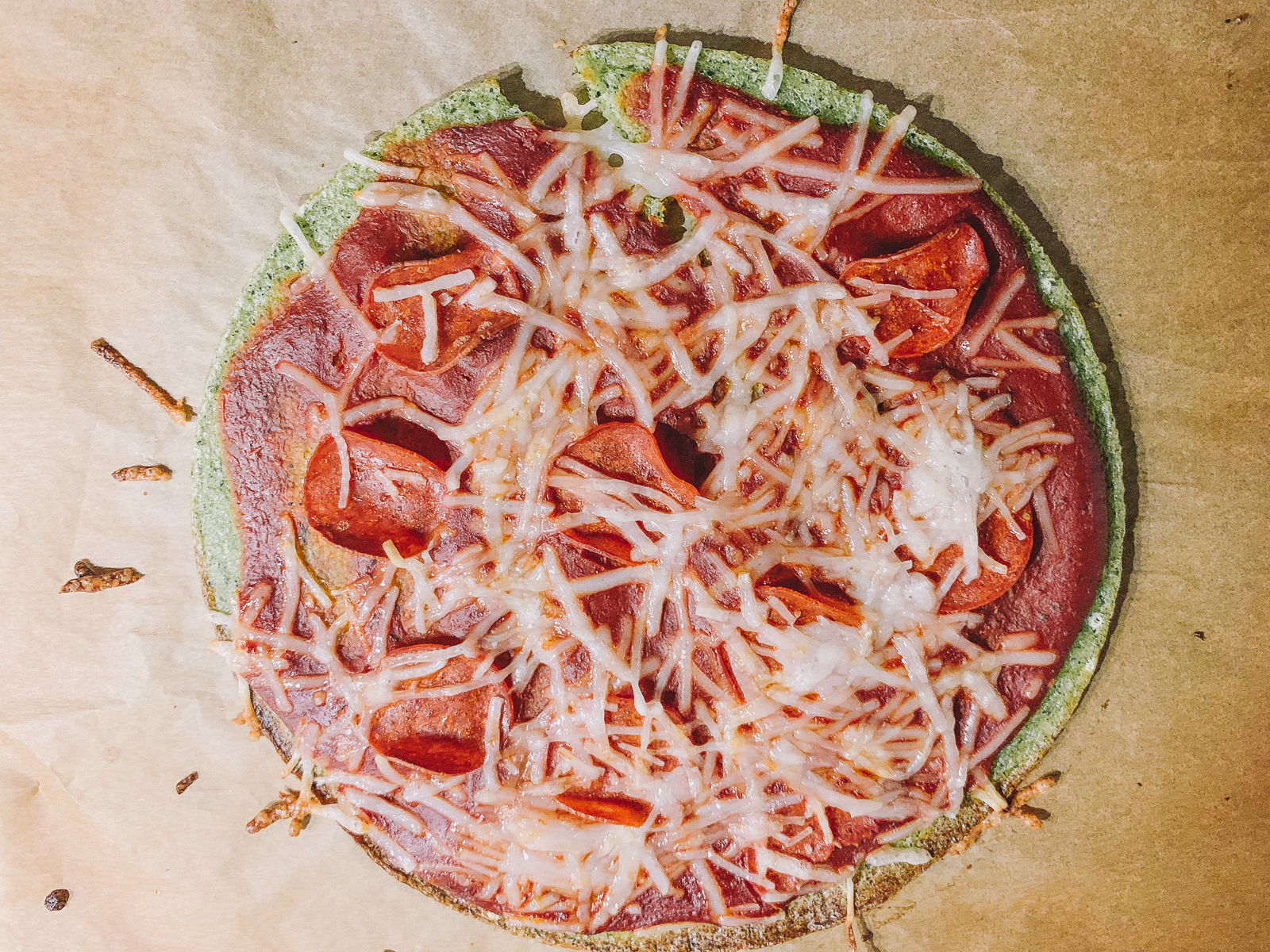 I made a quick pizza for Kyle and me to split. I used the kale & broccoli crust from Trader Joes (cook it at 420 for ten minutes on each side before adding the toppings), topped it with tomato sauce, Applegate turkey pepperoni, and Daiya mozzarella shreds. We make this a lot! 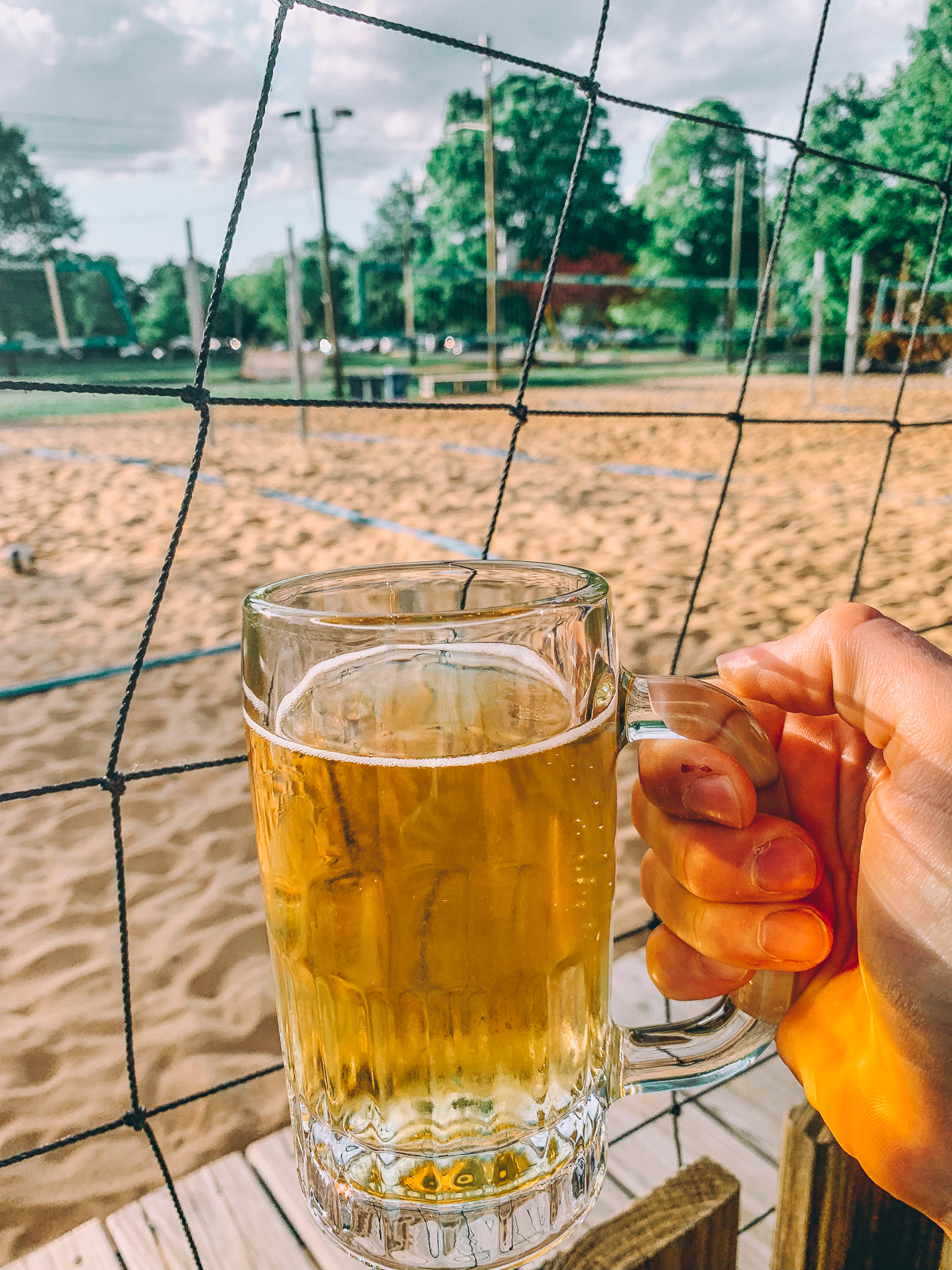 I was excited about the Thursday night sand volleyball league. It’s so much fun and the weather couldn’t have been any more perfect. After our matches, we headed to Burton’s for dinner. Caitlin and I both ordered the gluten-free/veganGeneral Tso cauliflower wings. These are honestly one of the best things in Charlotte. I was excited for Caitlin to try them, and she was pretty impressed too! My body felt wrecked the next morning after playing sand volleyball. I was throwing myself all over the place to dive for balls, and I felt it when I woke up. I figured a run would help loosen up my body, but I felt worse. My neck and were so tight. After showering off, I knew the rest of Friday was going to be very inactive. 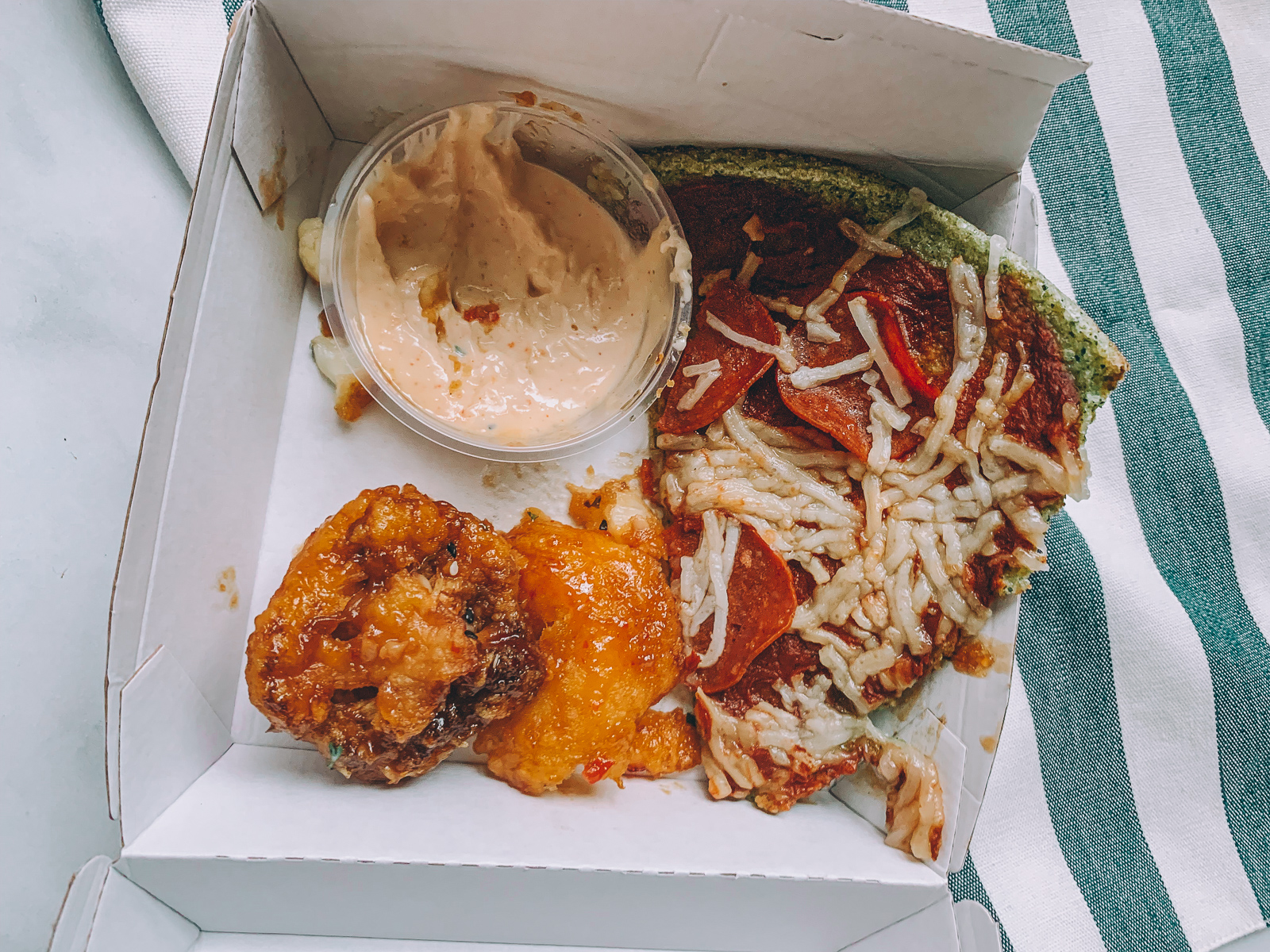 Most people wouldn’t take pictures of their leftovers, but keepin’ it real. Here’s Friday’s lunch! 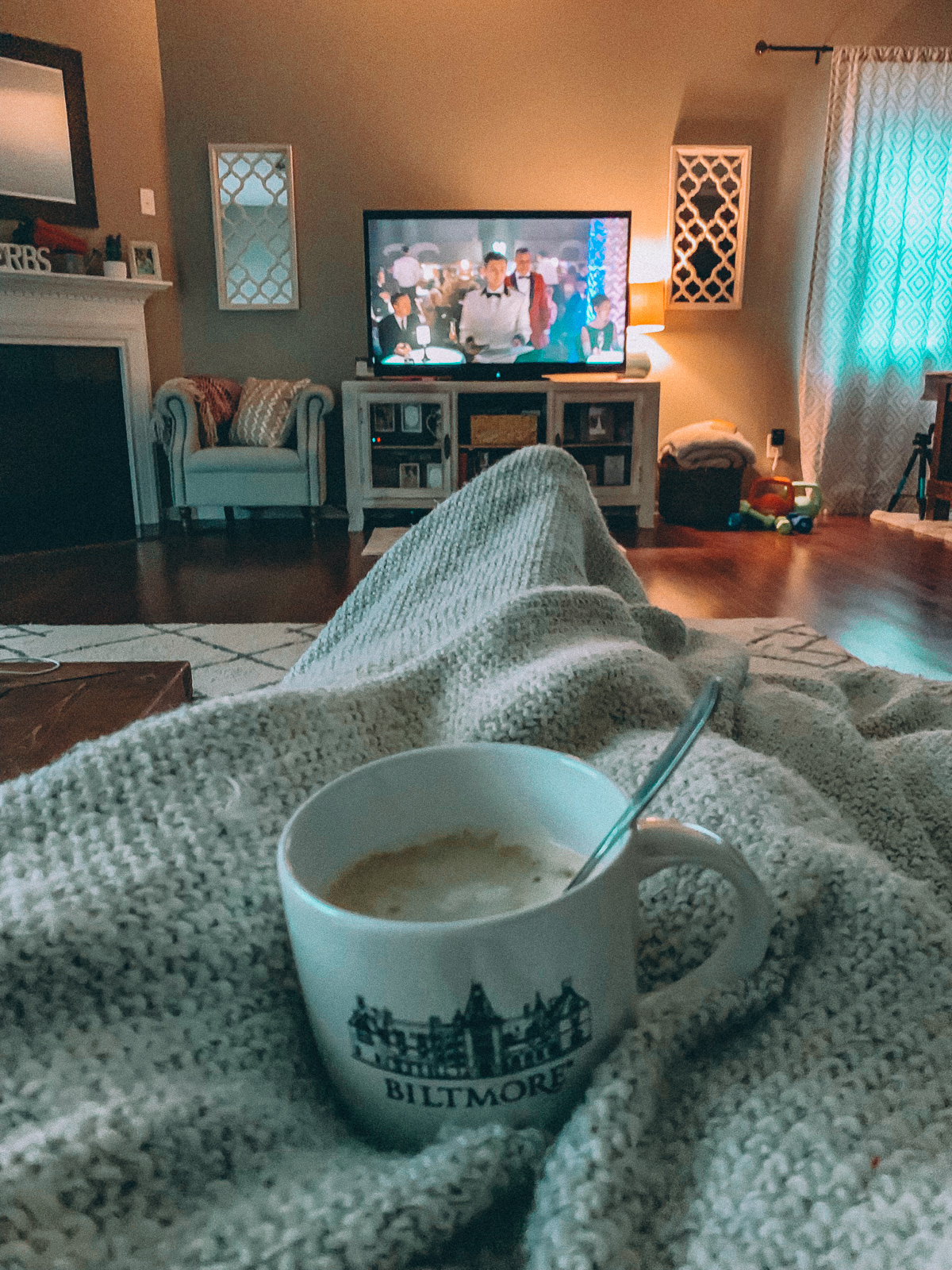 I decided to watch a movie with a cappuccino on Friday afternoon. It was raining, and since my brain wasn’t cooperating, I thought it was the best decision. I watched Green Book, and goodness was it a wonderful movie! It makes you feel sad, but happy at the end. 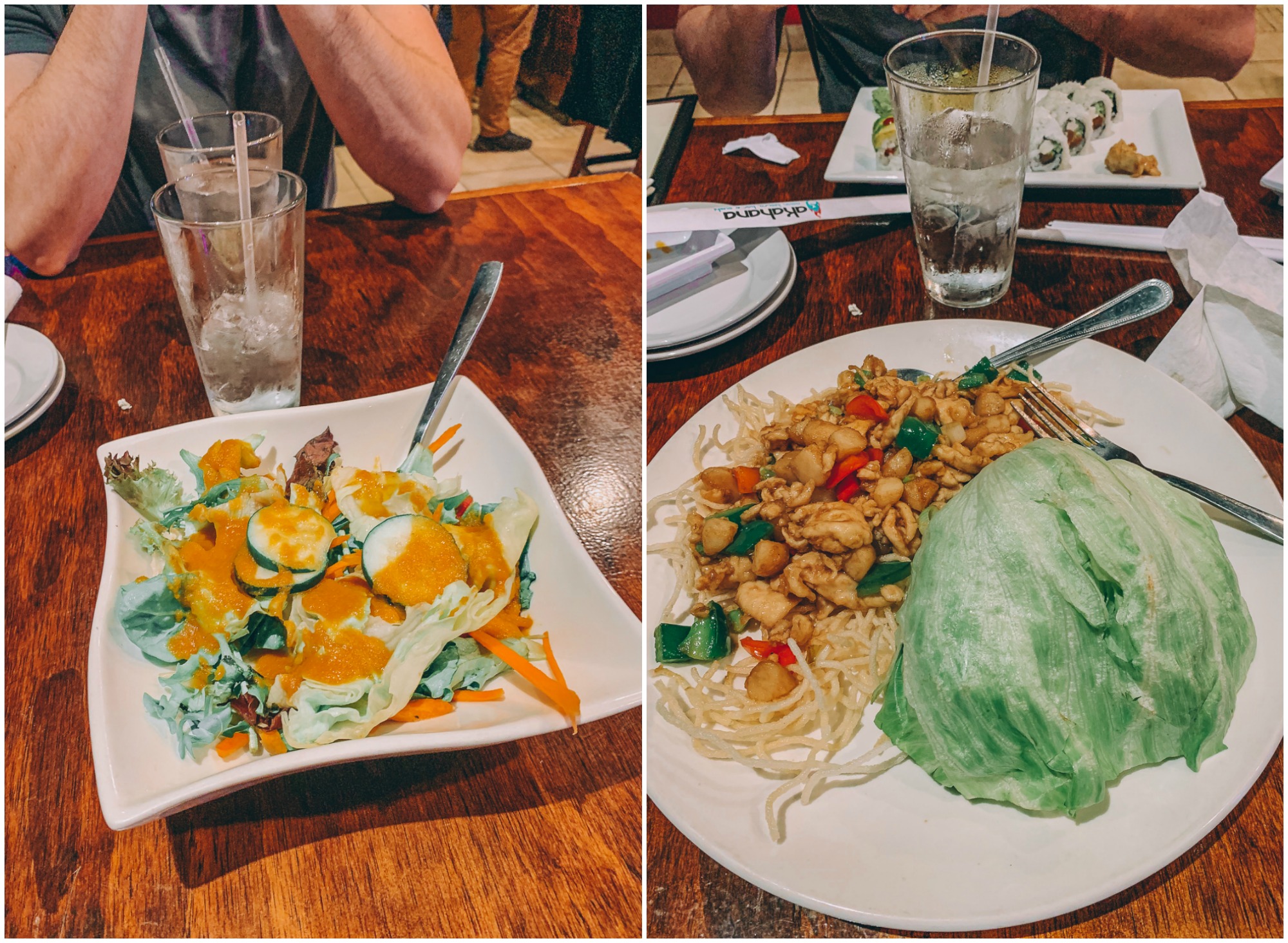 Kyle and I decided to go out for dinner on Friday night. We went to one of our favorite sushi spots, Akahana. I ordered my favorite thing on the menu, a ginger salad and the gluten-free chicken lettuce wraps. I could eat this every single day! 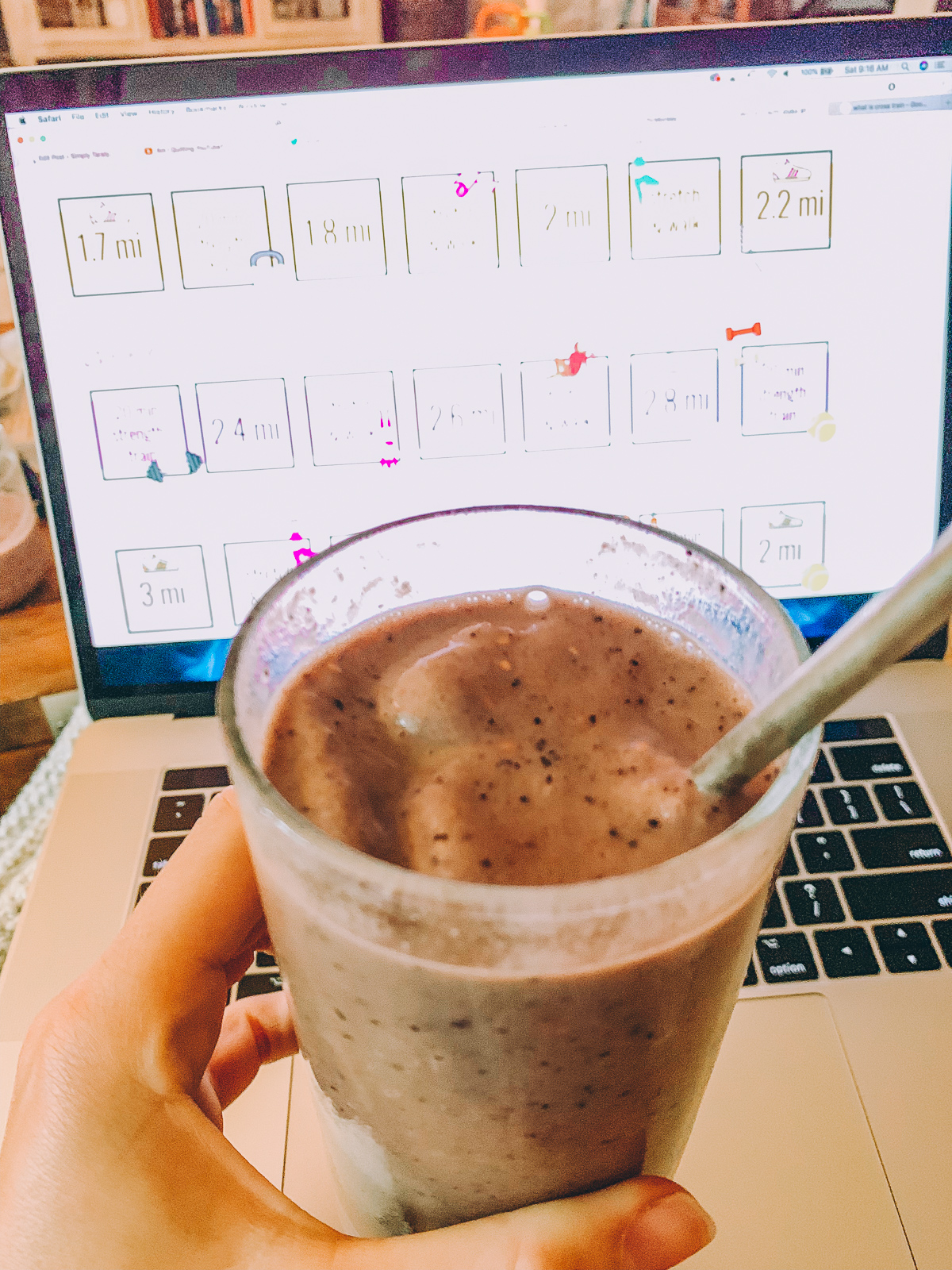 I worked on more of the running printables Saturday morning while drinking a smoothie. I decided not to go to tennis because my body still felt super sore, and it was overcast outside so I figured we’d get rained out anyway. I headed to the outlets to get some new running shoes on Saturday afternoon. As I was checking out, Becca called to see if I wanted to meet her at Lights Juicery & Cafe for lunch. Absolutely!

Becca and I split a french press coffee and their veggie dream sandwich with a kale salad. The coffee is so good there, but the food is just as great! We love this spot, especially since it’s halfway between our houses. 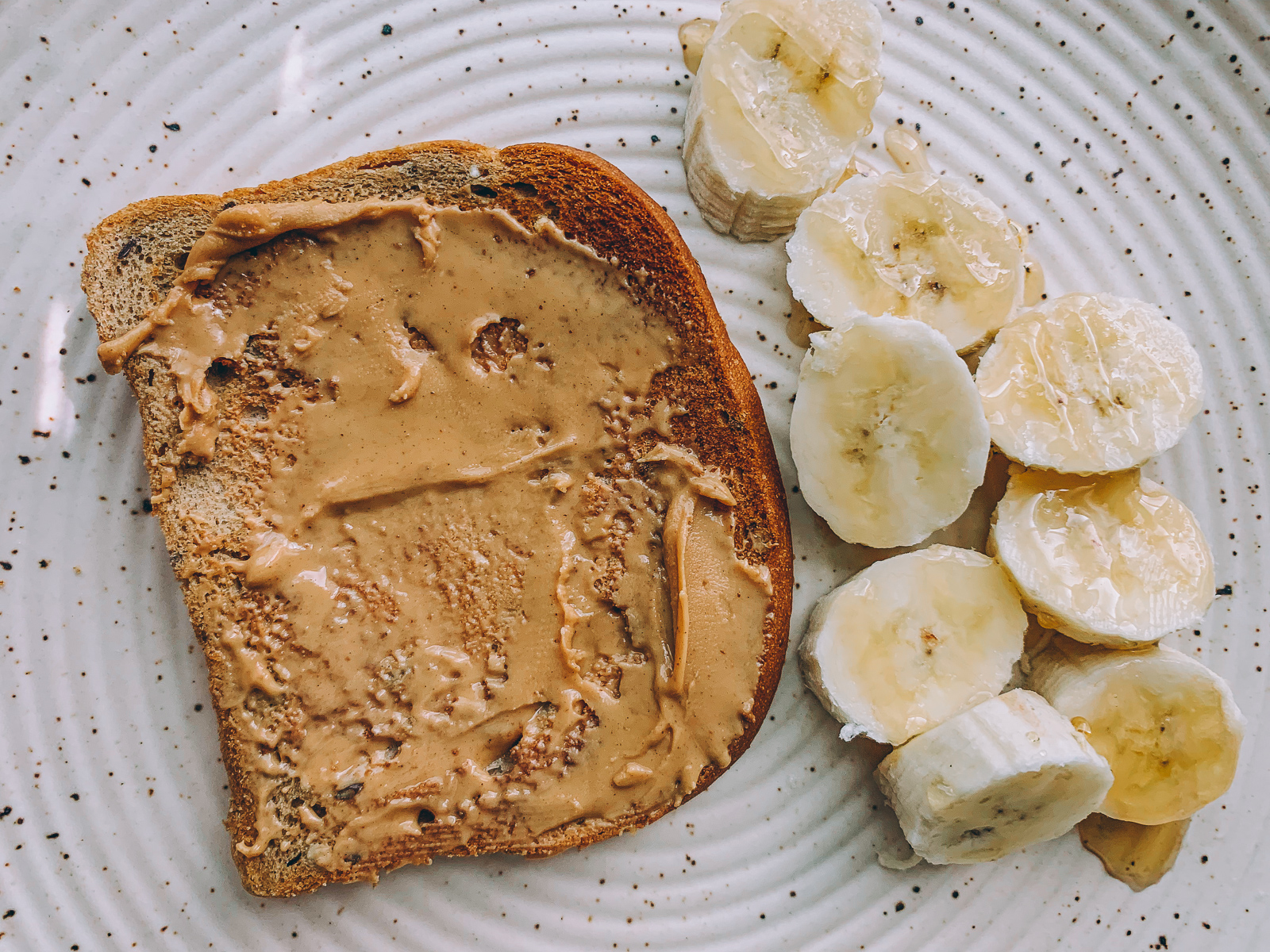 I watched an Easter service on t.v. while having my coffee on Sunday morning.

A few hours later, I had a slice of toast with peanut butter and banana slices to fuel my run. I usually let my food digest 45-minutes before taking off. 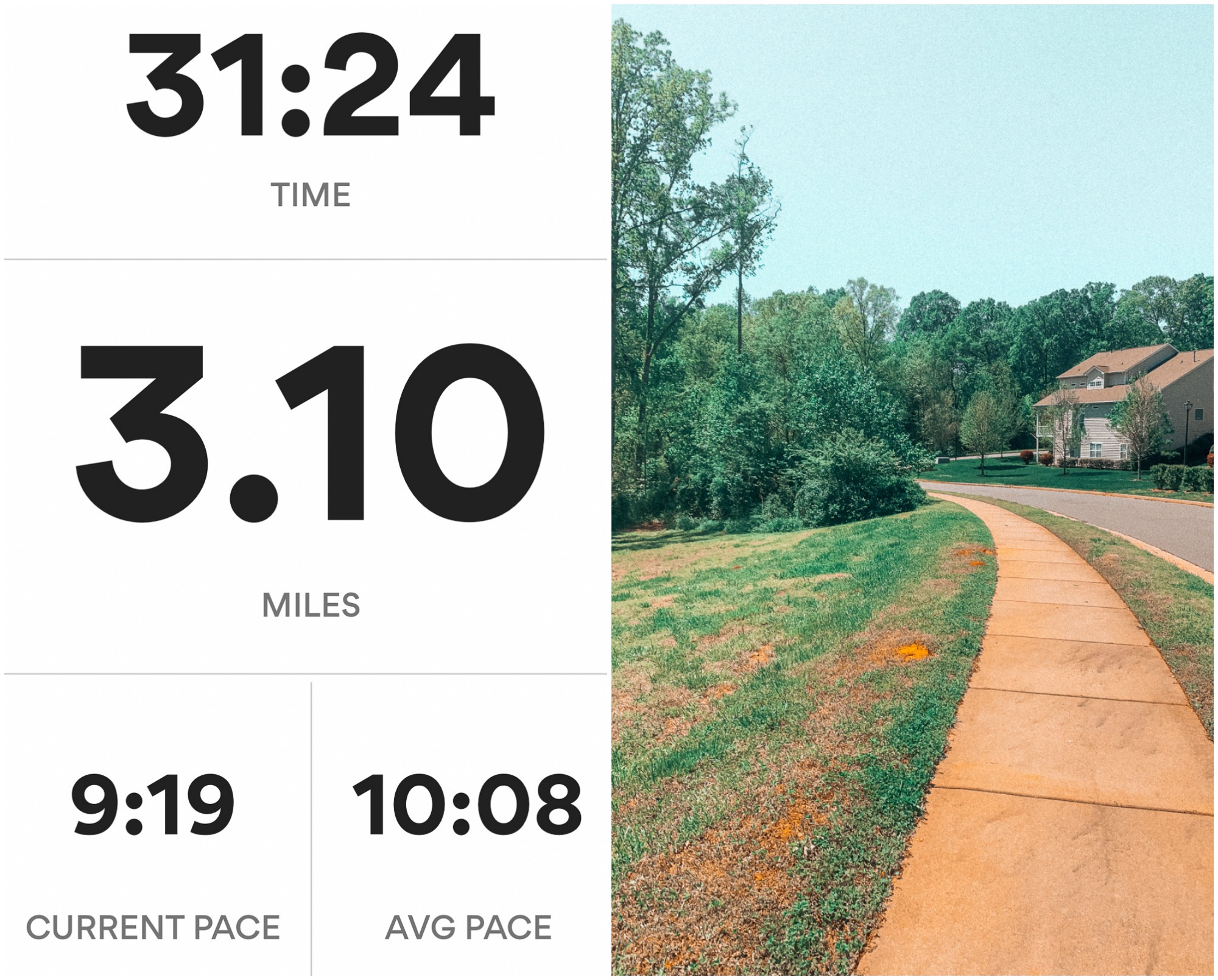 It was my first run with the new running shoes, and it’ made a world of difference. I have a wider foot, and I kept getting pain when I landed on the sides of my feet in the Brooks I was previously wearing. I felt like the past running shoes have been way too bulky and heavy for me. These Gel-Quantum 90 SG running shoes were light, super foamy, and wide enough for my feet to land comfortably. The best part was that the outlets had a BOGO on these! They are on sale right now, but definitely go up 1/2 a size.  I have them in grey and harmony white. I felt like I was running on clouds in these! 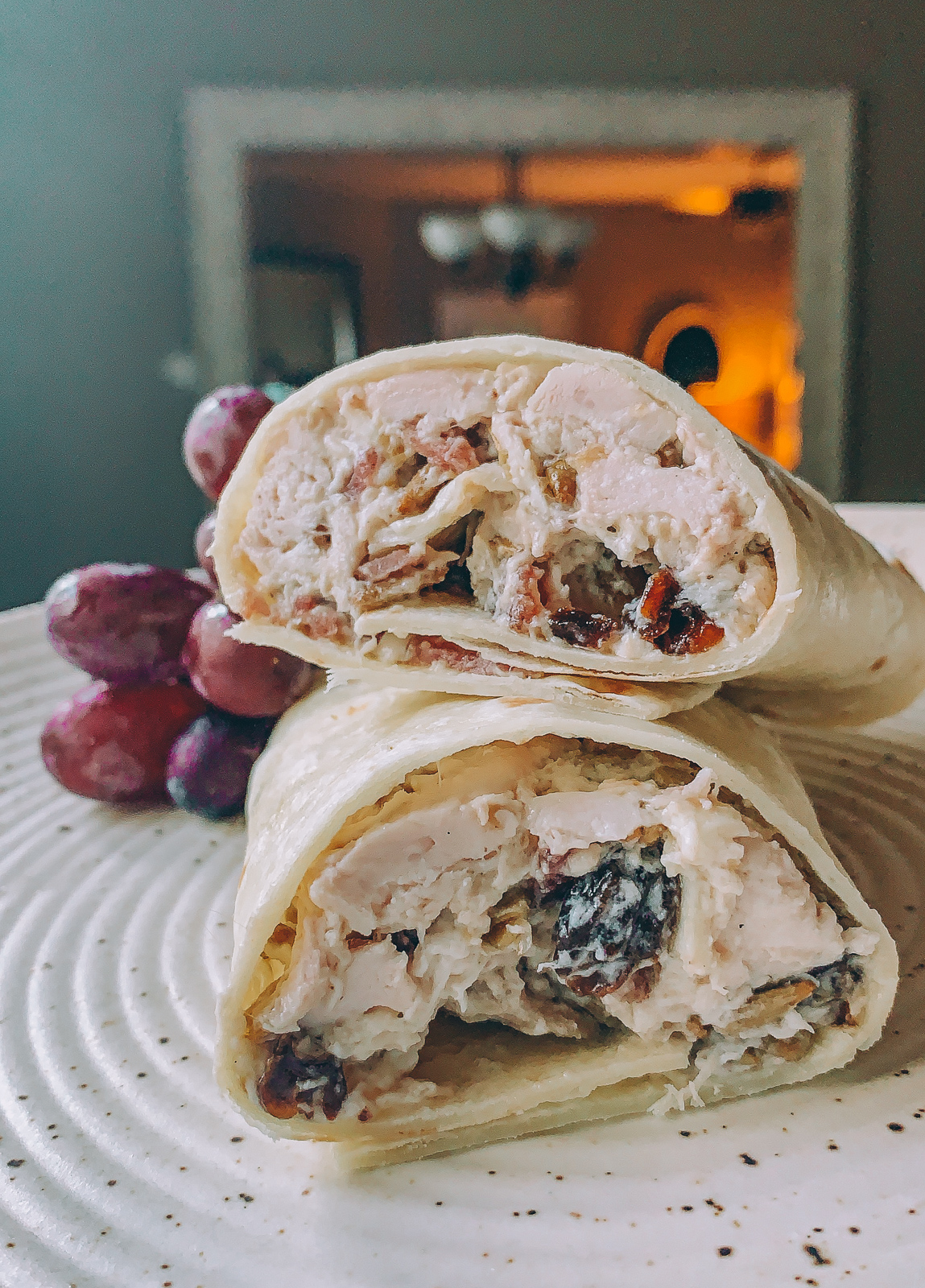 For lunch, I made another batch of chicken salad to go with the gluten-free wraps! 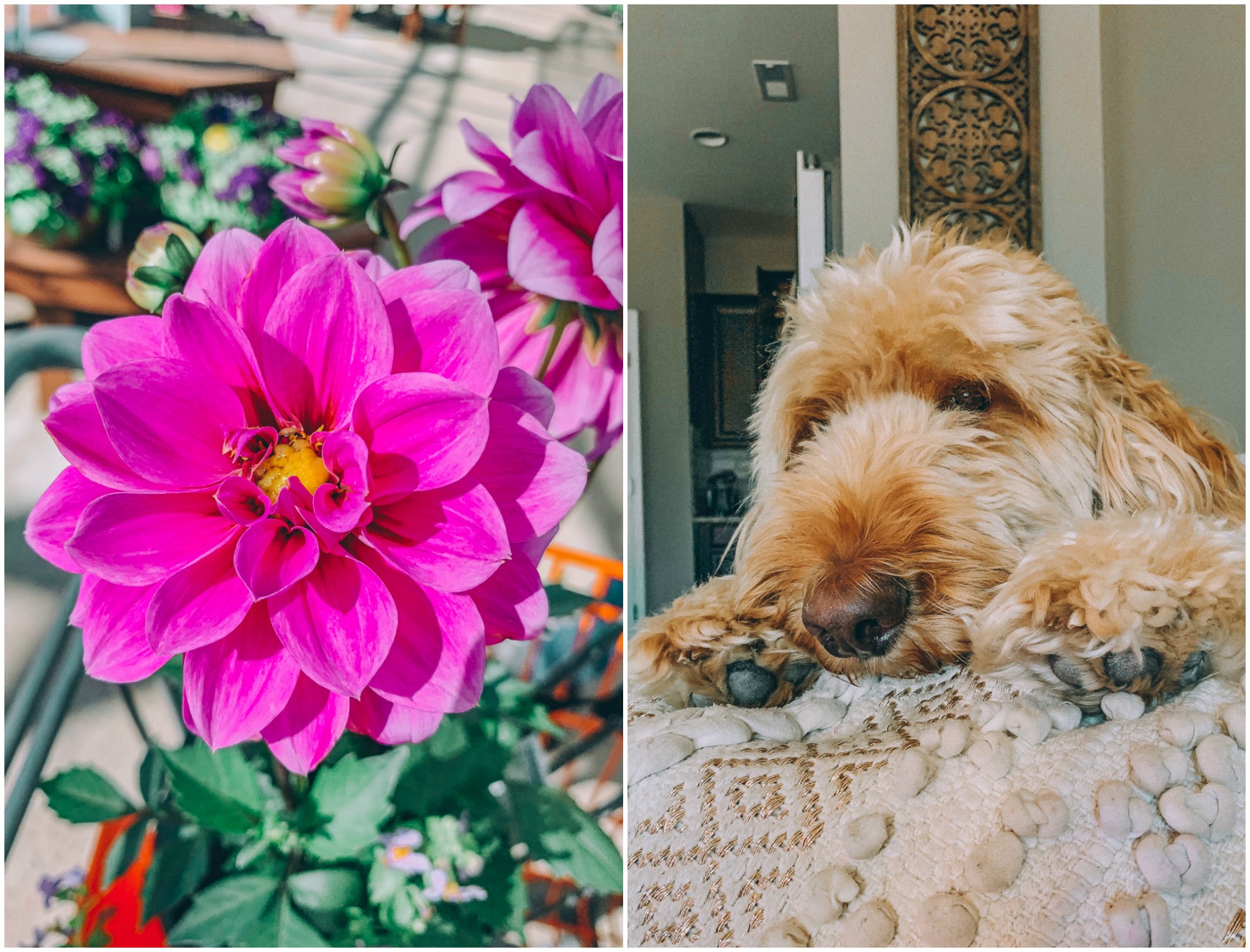 Kyle and I took a trip to Home Depot to grab some cleaning supplies and I could not resist buying a few of these gorgeous flowers to put out in the pots out front. I hope you all had a great weekend and an even better week! 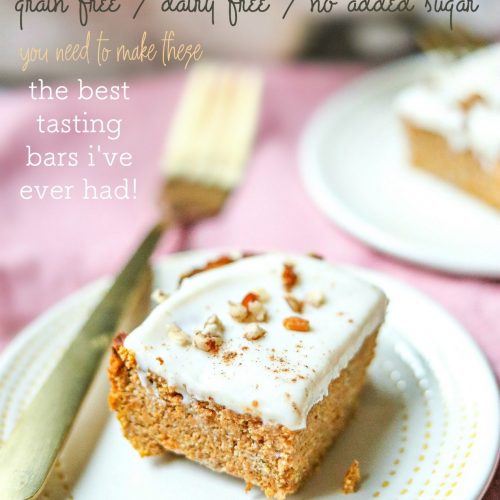