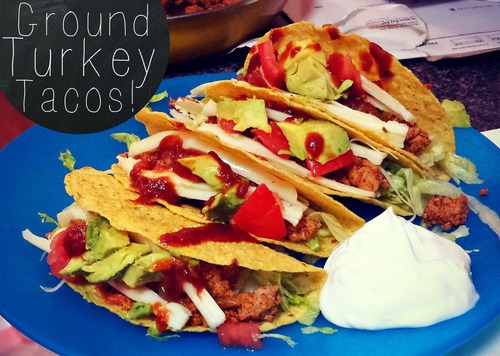 I have a little extra time tonight, so I thought I’d do a quick post and share a recipe with you all. It’s a simple dinner idea that you might like! Especially if you are a taco lover.

My boyfriend is obsessed with tacos. He would eat them all day, everyday if he could. On Saturday night, I made him lighter crunchy tacos for dinner. It was one of those “do your own thang” kind of night. I had zucchini pizzas. I cooked up one pound of ground turkey meat. Once the meat was fully cooked, I mixed in a packet of Whole Food’s 365 taco seasoning.

At the bottom of the taco shell I added a layer of lettuce. Most people add the lettuce on top, but it stays on much better when the meat is weighing it down.

On top of the meat, I added a couple tablespoons of peach, corn, and bean salsa.

Sometimes it’s easy to get carried away with piling on the cheese. Instead of using shredded, I peel one stick of string cheese for the tacos. I also use a jalapeno to give it a different taste than the traditional taco cheese.

On top of the cheese, I added diced roma tomato and avocado. I added a layer of taco sauce and a side of plain Greek yogurt as a sour cream replacement! My boyfriend devoured the tacos and I had to actually hide the leftovers. He kept going back for more! When I woke up in the morning…the leftovers were gone. He found them! 🙂 Men are tacomaniacs. I’m like that with chocolate.

Open
After a four-week hiatus from weekly recaps, there

Open
The last leg of our California Coast road trip is

Open
Sharing a fun project on the blog today! 🍃I tur