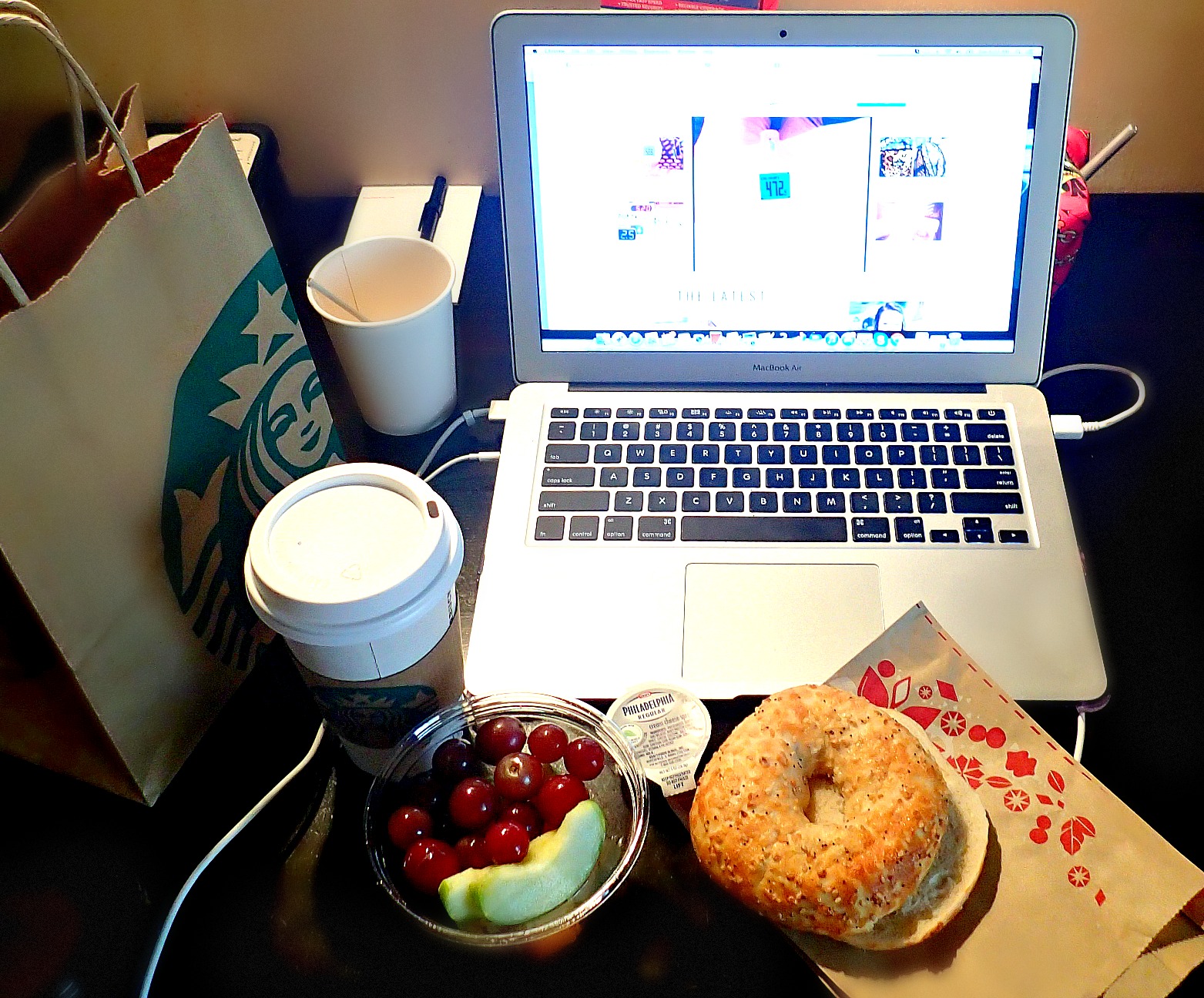 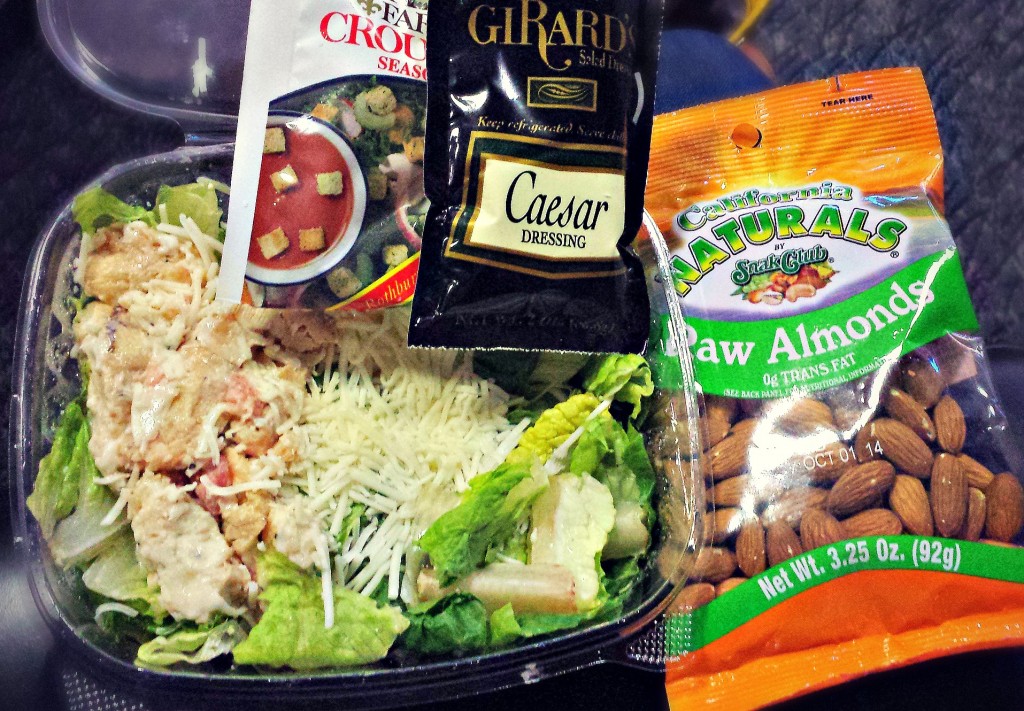 I can’t believe I’m typing up a blog post at 6:30 am without coffee. Remember when I posted my other Vegas trip recaps? Well, those got a little out of hand and sloppy, so I wanted to keep up with these as soon as I could, rather than posting pictures and trying to remember the sequence.

I finally got into Vegas around 1:30 in the afternoon. Jeremy’s flight was delayed because of the snow in Chicago, so I had to wait a little longer for him. I would have gone to the hotel, but our hotel reservation was under his name. I didn’t mind hanging around the airport and working on the computer.

5pm rolled around and I was so hungry! I stopped at a little cafe and picked up a Caesar salad and a bag of almonds. This held me over for a while. 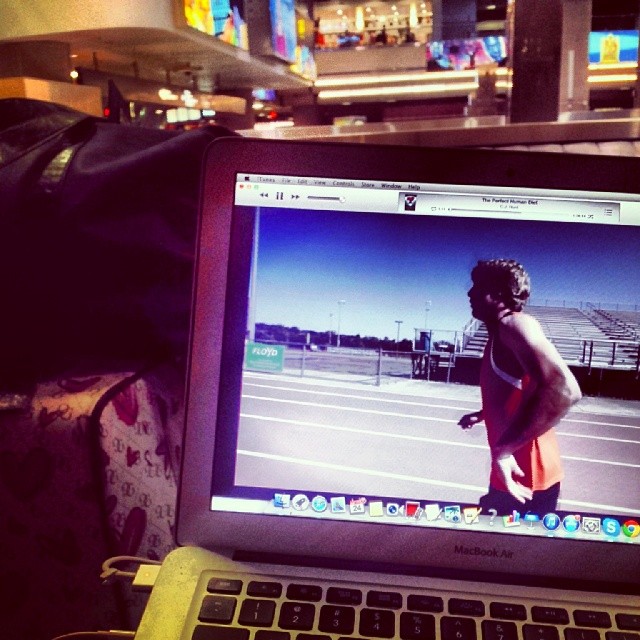 Jeremy’s flight was incredibly late. I decided to watch a documentary on Itunes. “The Perfect Human Diet” was the one I chose. It was pretty good, but I only got to watch about half of it before Jeremy landed. I’d like to re-watch it more in-depth. Maybe it’ll be my movie on the flight home. 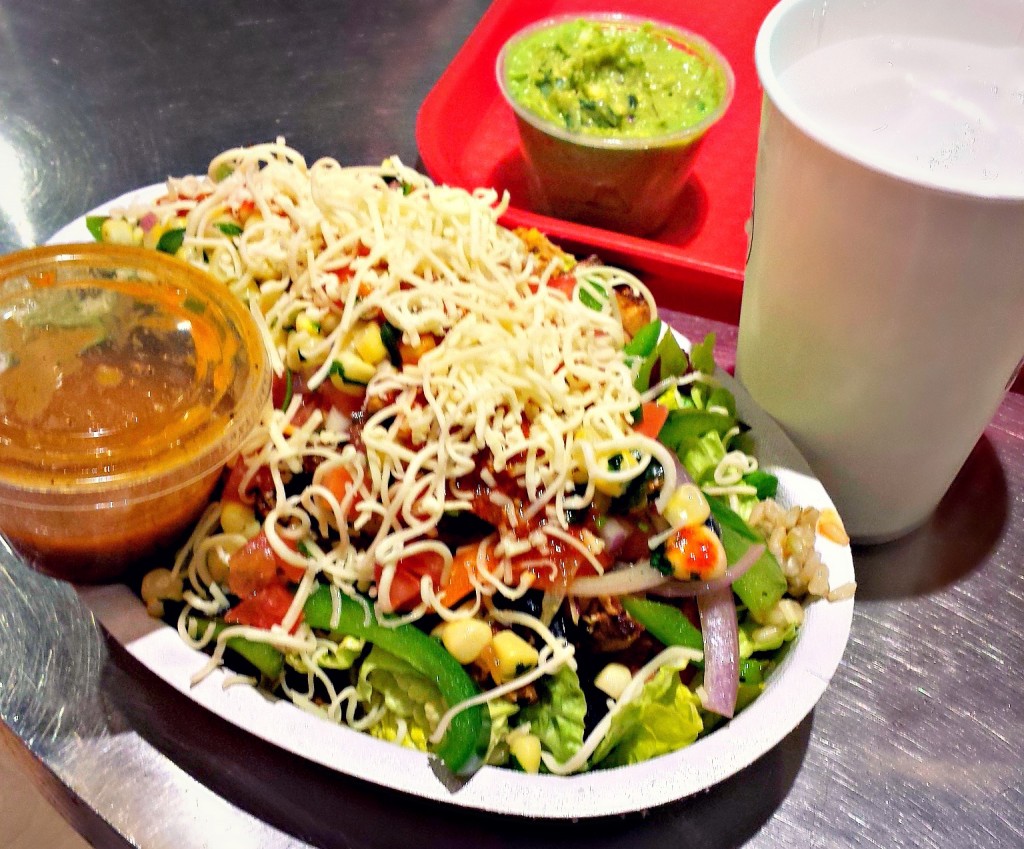 Jeremy and I were so exhausted and struck by the time change that we wanted to have a calm night and get some sleep. He had an all-day poker tournament yesterday at the Venetian and is actually still in. It ended for him last night around ten and will restart at noon today. Getting sleep on Monday night was necessary!

We ate at Chipotle for dinner (because it’s our favorite) and were way too hungry and tired to sit down and wait anywhere.

After we got back to the hotel, we passed out like babies. 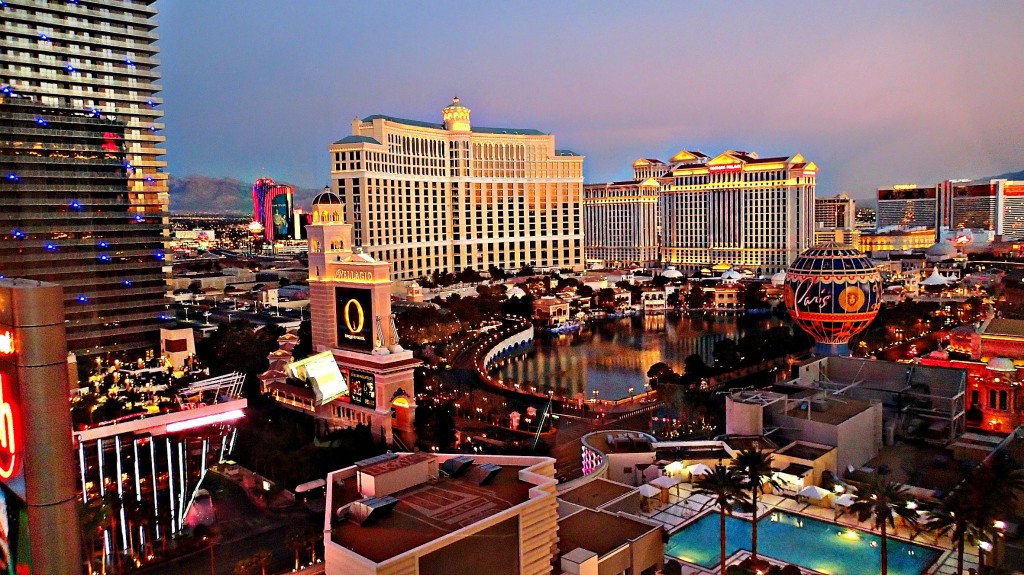 This is the view from our hotel room! My goal is to stay in all the top Vegas hotels before I die. It’s a weird goal to have, but I have it. I’m six down with a lot to go! 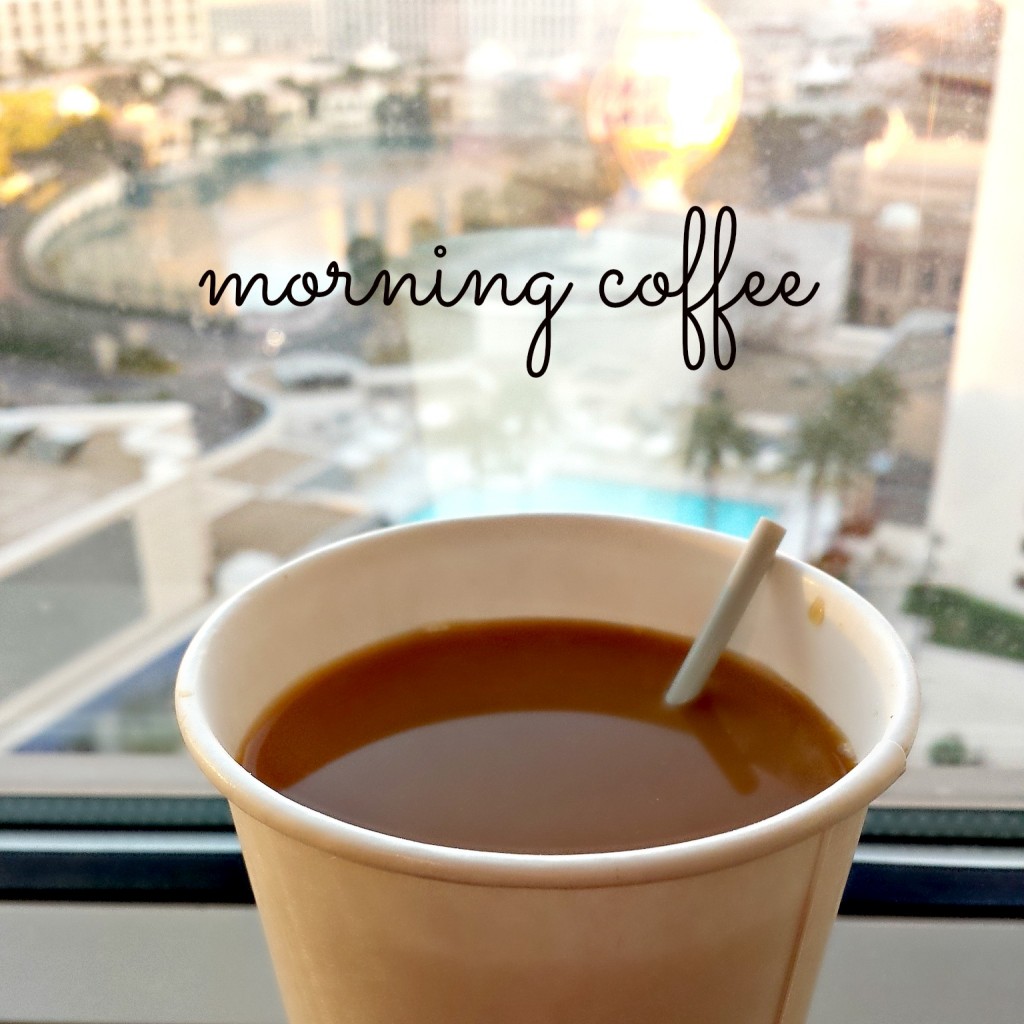 I was an early bird yesterday morning. I’m used to waking up around seven at home, and that’s like four am here! I usually get used to the time change on the last day. Not that it matters by then.

I did my normal routine; I woke up, had coffee, watched Good Morning America, and checked emails. 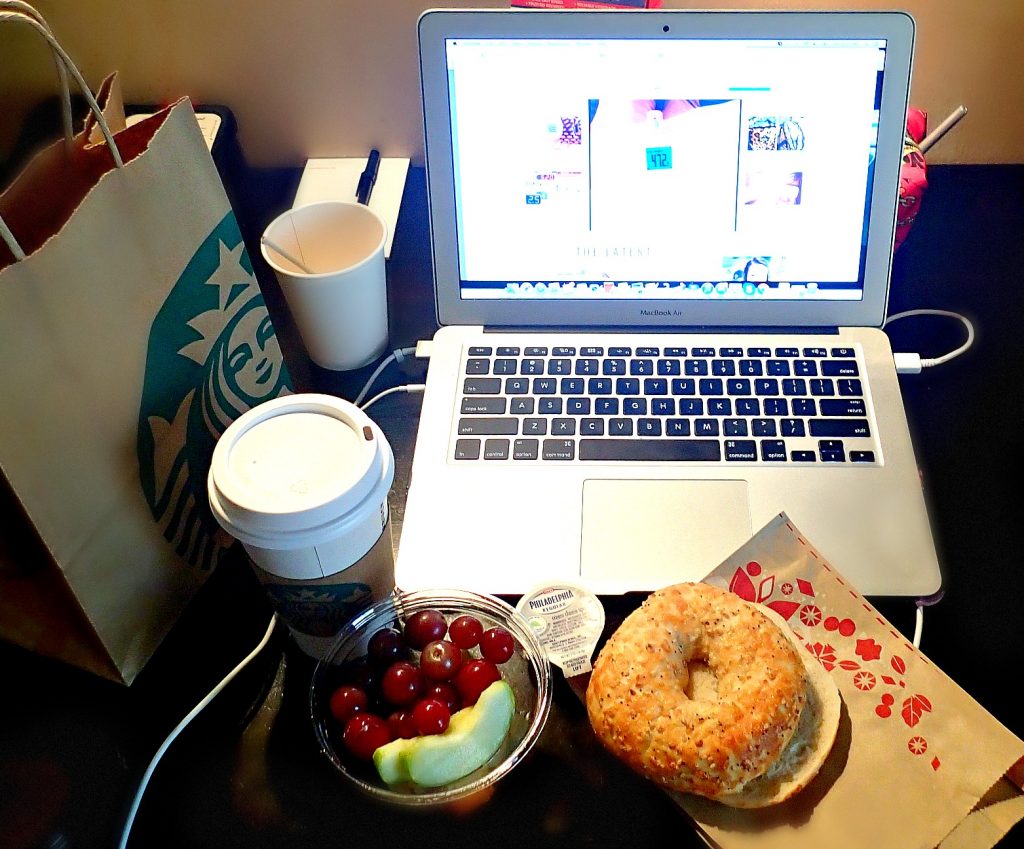 A couple hours later, I went down to get some breakfast. The hotel cafe was packed, so I just chose Starbucks. I’m so over waiting in lines at restaurants. Valentines day traumatized me. 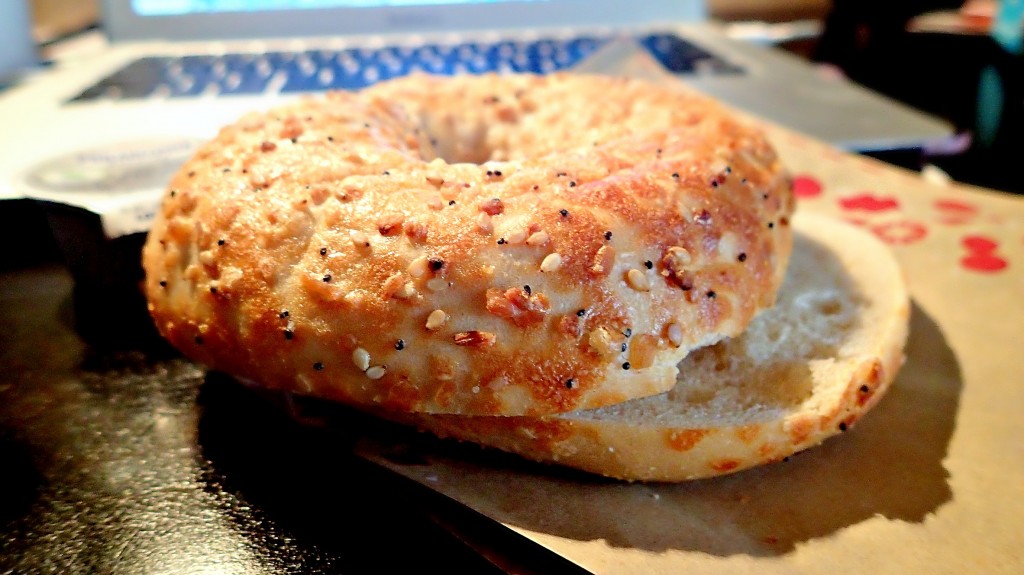 I bought an everything bagel with cream cheese, a fruit cup, and hot brewed passion Tazo tea! 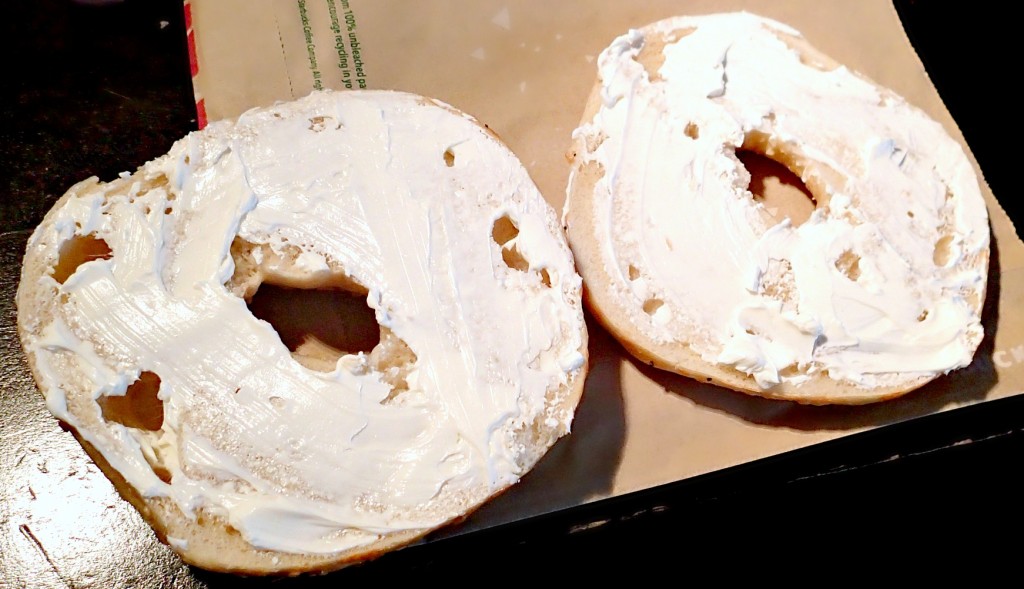 I’m not a fan of bagels without cream cheese. If you’re going to eat a bagel, you might as well spread cheese on it. Do it right or don’t do it at all. After breakfast, I took a two mile walk outside followed by my Jillian Michaels kick boxing video! 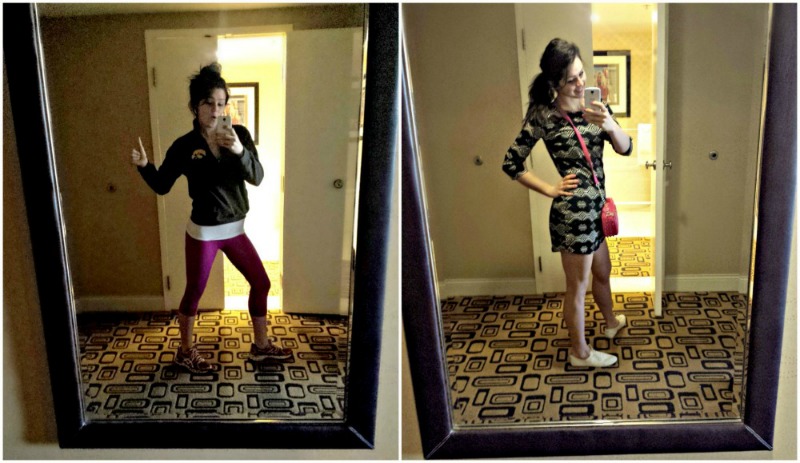 I couldn’t help it, and had to take the before workout and after workout pic. I forgot my brown side purse, so I was stuck with that obnoxious pink bag with my outfit. I’ll be stopping at the mall today to take care of that problem. 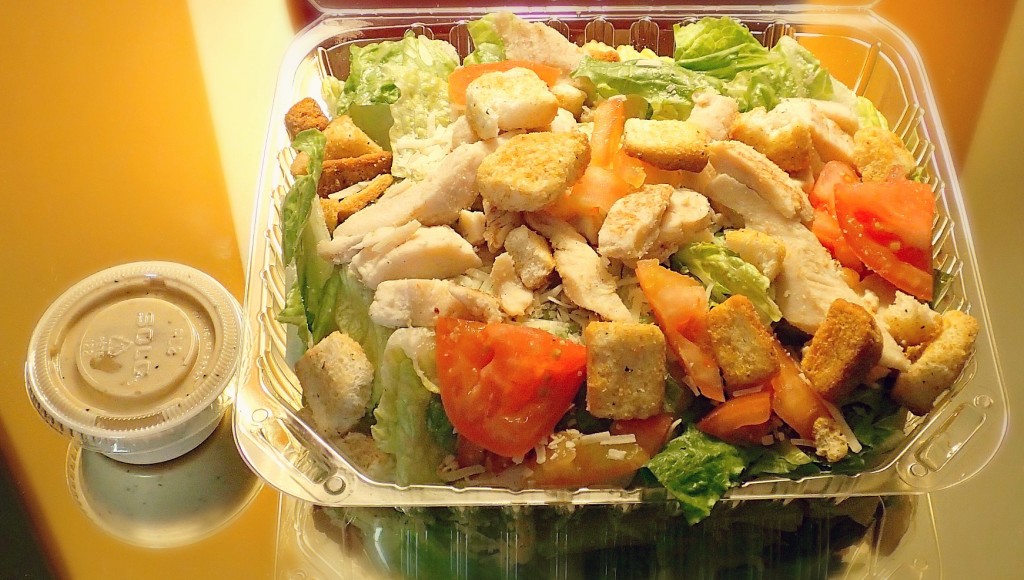 After wandering around Vegas, I picked up a Caesar salad at the Meatball Spot. I took it back to the room and tried to fit in a little nap afterwards. I didn’t know how long Jeremy’s tournament would go, so I figured a nap wouldn’t hurt. 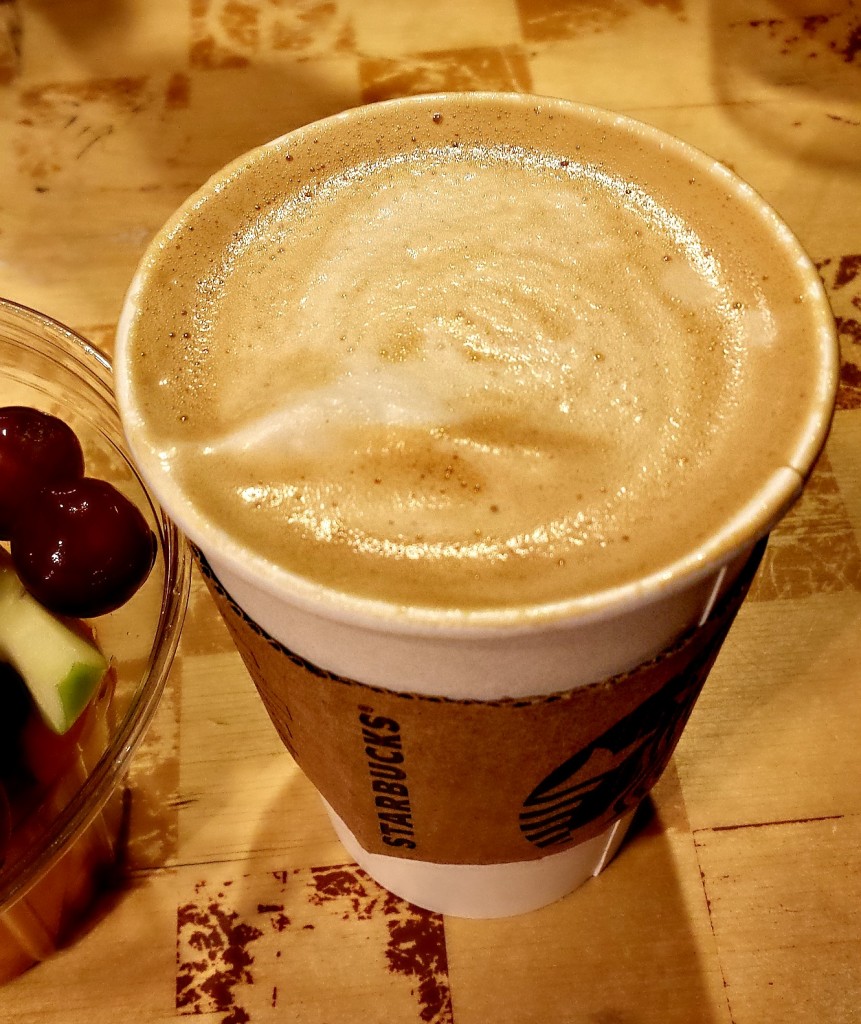 The nap was unsuccessful so an afternoon pick me up was necessary. 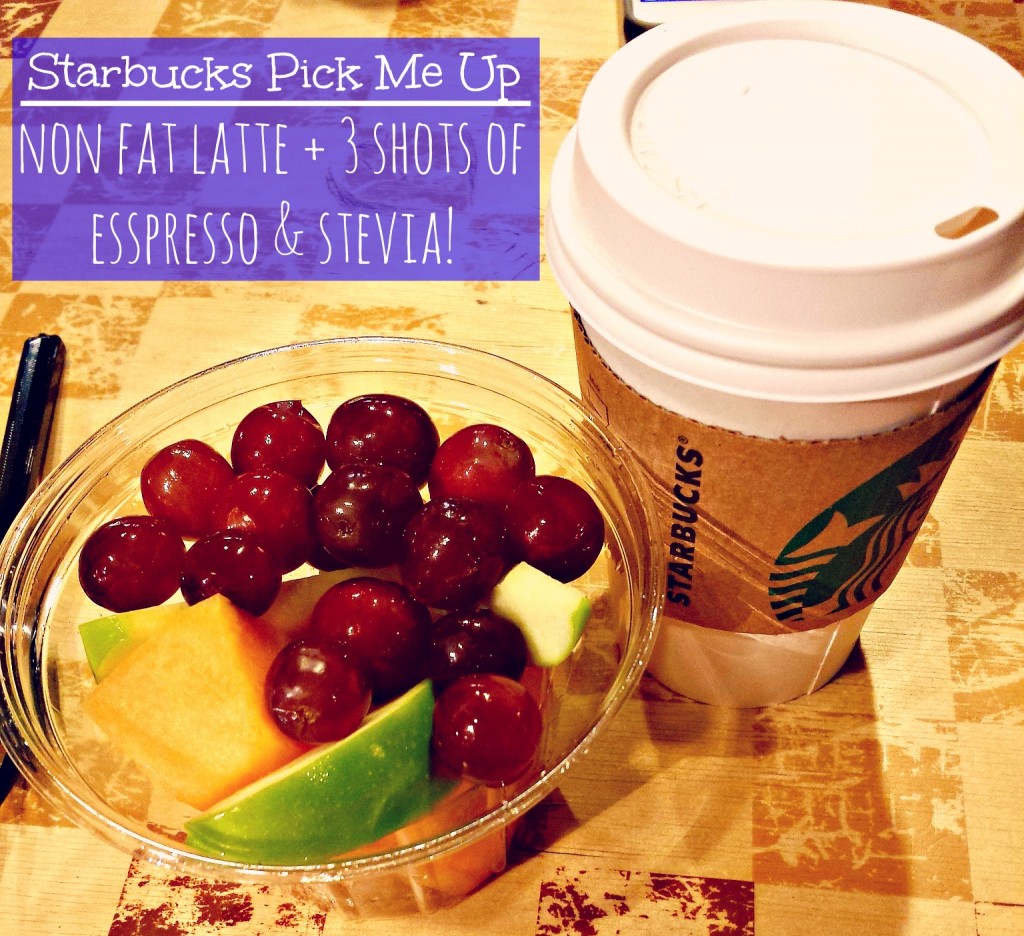 I had a cup of fruit and a latte. I know it’s silly, but I keep stevia packets in my purse because most restaurants only carry splenda, equal, and sweet in low. No thanks! 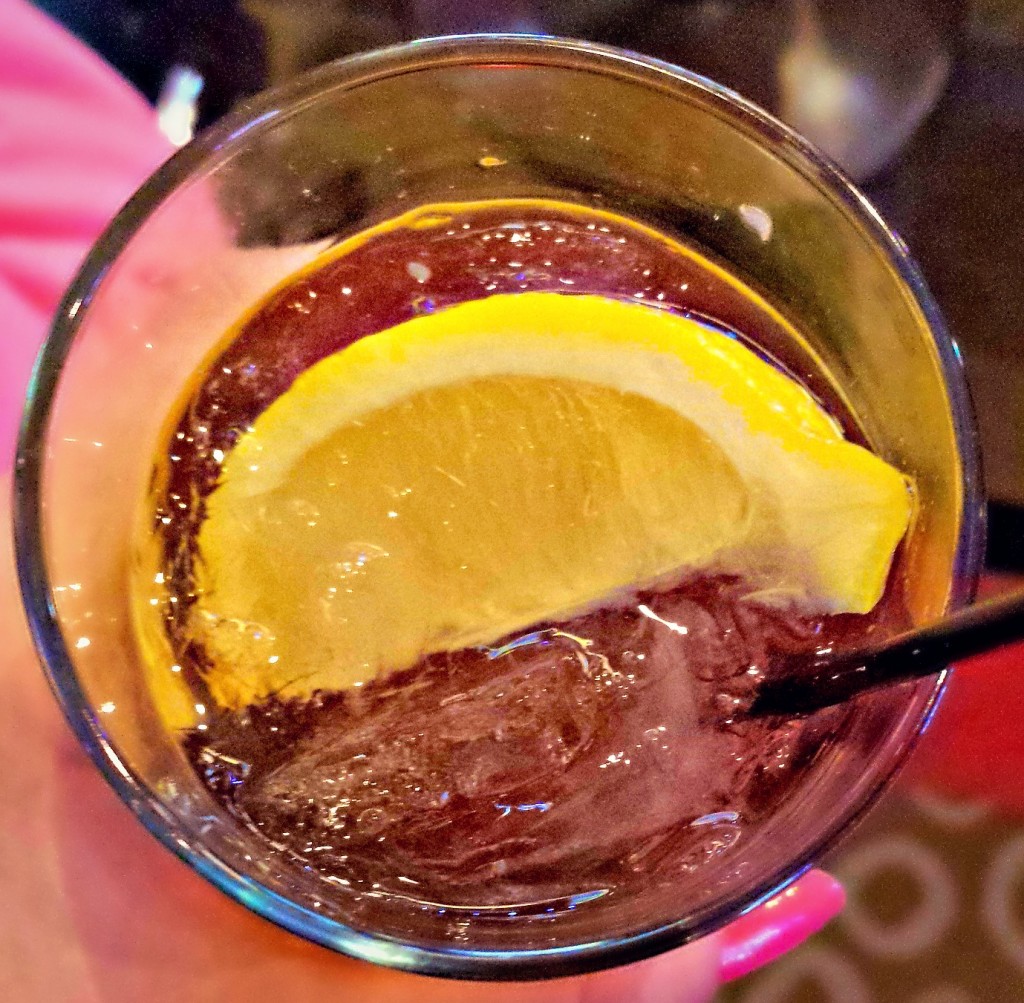 Finally around three, Jeremy’s parents arrived! It’s a tradition to meet in Vegas once a year. When they heard we were going, they hurried and booked their flights. Vegas is perfect for Jeremy’s parents. I’ve mentioned before about his mom having multiple sclerosis and his dad beating throat cancer but now facing leg circulation issues. It’s hard for them to get around places and Vegas is very handicap accessible and has a lot of things they can do without going all over the place. The first thing we did? Long Islands, please! 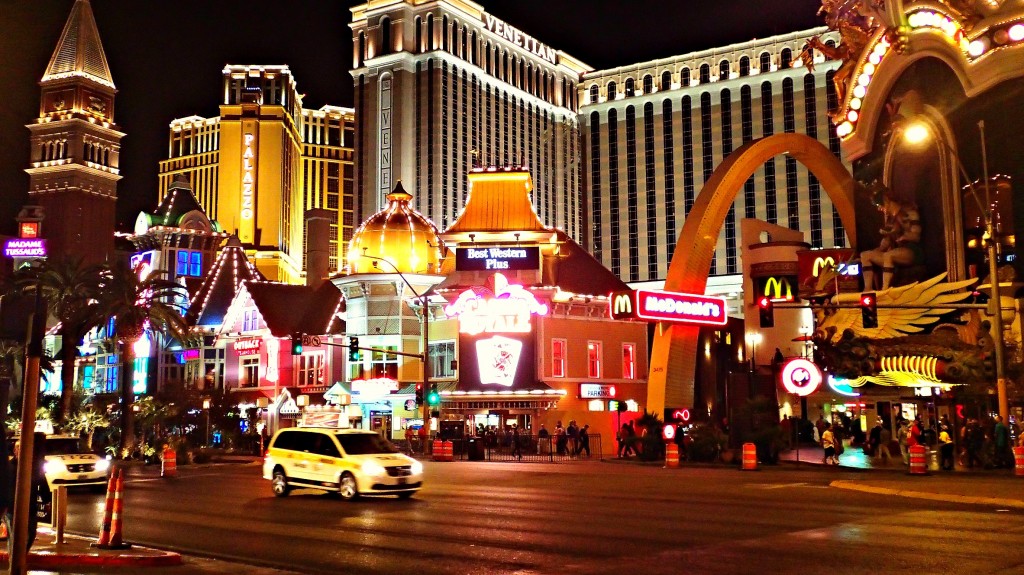 After hanging out around the casino, we headed out for dinner. Jeremy was still in the poker tournament. It started with about 250 people and now only 40 are left. He had an hour break, so we met him for dinner.

Oh! and here is the skirt I made! I’m loving the Las Vegas weather! I cut the top of my foot on my flip flops the first night, so I’m stuck wearing my laced shoes. 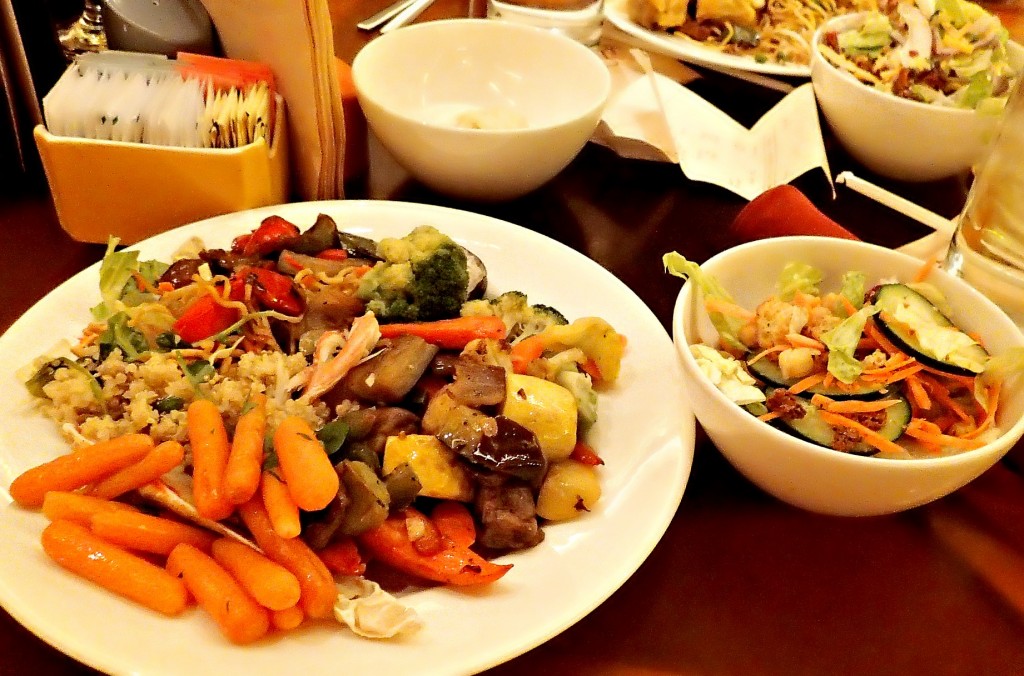 We had dinner at the Mirage last night. Their buffet was really good. I had a plate of glazed carrots, grilled chicken and vegetables, quinoa, Chinese chicken stir fry, and a salad. 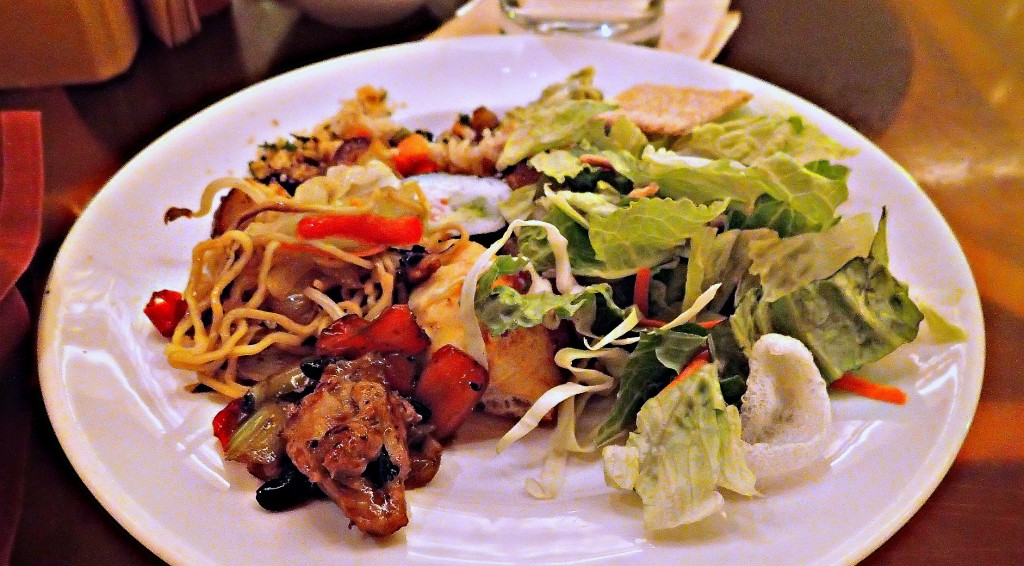 I was pretty full but managed to fit in one last plate. I had more salad, lo mein, Chinese chicken stir fry and some crackers. 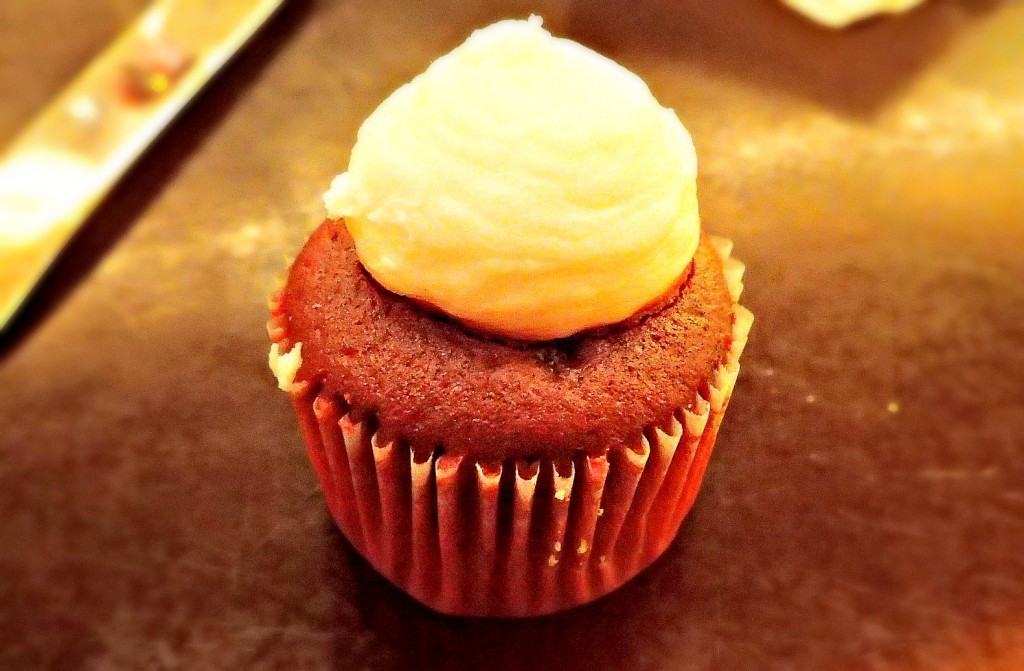 I ended my dinner with a red velvet cupcake! After dinner, Jeremy went back to his poker tournament and his parents and I sat down and played blackjack for almost 4 hours! It was a blast.

I made it to the top again!

Thanks For Sharing Your Photos With Me!